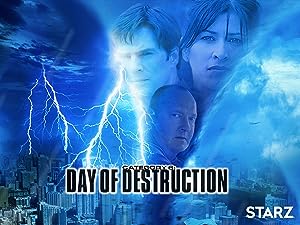 Season 1
(201)
5.12004TV-PG
It's not a good day for the Windy City - a power blackout has shut down the city just as three massive tornadic storm systems are set to collide over downtown! Category 6: Day Of Destruction is a rip-roaring disaster miniseries that was the most watched show of the season during its fall 2004 debut. Of special note were its special effects - jet engines were brought in to create the enormous winds

TylerReviewed in the United States on January 20, 2011
5.0 out of 5 stars
Category 6 deep-sixed Chicago!
Verified purchase
Great movie! So many plots and so much time to put them in as well. I like disaster flicks that tear apart cities, especially the city of sin(Las Vegas)in the beginning. 20 or 30 miles away from Vegas at that time, an old couple is sitting on the steps of their ranch, and to their pure amazement, hundred-dollar bills are being planted on their lawn, courtesy of the high winds that carried them there.
"Wow, Marge, someone probably blew up Vegas!" That got a big laugh out of me.

This movie goes on for a while about the vulnerability of power companies and what would happen if a computer hacker just happened to shut off the power to an entire city, of which does happen about 24 hours before the approach of the storm. And apparently, one of the main characters, a power company guy, is cheating on his wife with a hot blonde(nice stereotype!), which the wife finds out about. Then you have a news reporter who not only gives headaches to a lot of the people she's interviewing with her incessant nagging, but she also nags at her brother, an Air Force major, that maybe he needs to quit playing "cowboy" with his pilot job just because he's going to be a father. I didn't like the reporter much for that. Come on, lady. It's a steady job, and your brother probably gets paid more money as a field-grade ranking pilot than you do pointing microphones at people's faces. Having a steady job is something a new family needs.

Other than that, the movie escalates into action with it's disaster sequences, a punk kid trying to rob a bank out of pure anger just because his girlfriend dumps him, and then the girl gets shot in the shoulder when she's trying to encourage him to let the people go the next day. I liked the thrilling sequence of Randy Quaid playing "Tornado Tommy" as he gets sucked into a twister with his SUV. Here we go!!! The movie was brilliant and it also educates you on the comings and goings of power companies as they run our "third-world grid." Excellent!

Lynne A. WallaceReviewed in the United States on June 12, 2007
4.0 out of 5 stars
Pretty darned decent for its genre .....
Verified purchase
Yes, another natural disaster movie beginning with a series of intense storms in unexpected places throughout the country and culminating with two big ones colliding to create a super-storm over Chicago. The acting was absolutely terrific and the film offers the expected line-up of small and large personal dramas, crises, close calls, heroics and rescues.

I do have to air my few gripes about its content. It seems to drop all reference to the tornado storm while dealing with the hurricane's arrival. And while most scenes are believably realistic, I had to roll my eyes that the "good guys" never faced enough of the storm, while the three dubbed "villains" were, of course, killed by it. The water scenes showed seas not nearly rough enough for a category 5 hurricane, too many people ran around lost in the streets amidst the storm, and are there really that many palm trees in Chicago? <g> My final gripe ... what began as a series of storms building to these two merging abruptly ends, leaving the movie's entire theme of the overall catastrophic effects of global warming dangling pathetically. A politician's promises are all we're offered in the end.

Hey, pay no mind to my picking at the small stuff! Category 6 is decent and engrossing entertainment within the natural disaster genre! :-)
4 people found this helpful

beardogReviewed in the United States on April 24, 2022
5.0 out of 5 stars
Disaster and destruction!!!!!
Verified purchase
Bought the movie for my brother who loved watching movies about the destruction caused by tornadoes of earthquakes, etc. Loved the characters and the way the movie show how unpredictable mother nature can be.

Kindle CustomerReviewed in the United States on April 26, 2013
4.0 out of 5 stars
OK TV Disaster Film
Verified purchase
I just verified that this was a made for television product and not a theatrical release. Knowing nothing about it before viewing, save that it was a disaster movie, the film itself made its identity clear. Not that I am knocking such films. Many are fine, many are entertaining, but none work with the kind of budget that an expected Hollywood megahit can have behind it. They also have to spread themselves over a wide range of audience types rather than having the chance to build by word of critics and word of mouth so that a specialized audience can be attracted and stimulate others to come later in the picture cycle.
There is also the time factor; very few television productions can take the time that movie-makers can to rehearse, find just the right spot to photograph, polish the dialogue, spend a day on a 3 minute segment, and other normal film practices. Thus we have in this film the stereotyped relationships which allow the audience to fill in much of the story with simply a hint from the screen: the husband sleeping with another woman, the self-appointed crusaders for one issue or another, who are thwarted by all the guardians of Corporate Greed (public and private), when they try to pursue the Public Interest as they see it, the teen- daughter going astray problem, and all the rest.
Yes, this film has its full allocation of these human interest short-cuts, but, nonetheless, I found it entertaining, on the whole, since I did exercise restraint in dealing with the aforementioned stereotypes. I also took a number of occasions to take a break, walk around, and, in the usual ways, avoid almost three hours of exposure.
It was good to see Brian Dennehy, then in his mid-sixties, and looking it, who was not allowed to dominate the human element in the film, but was still a major acting force. One does wish he had more to do and more freedom to cut loose from his supporting role. Others in the cast did about what they were supposed to do with only the news reporter-crusader allowed to give a more than routine performance. The bit part of Washington administrator was also allowed to make an impact in the short time allotted to her.
Insofar as their resources allowed, they give us a good storm, and glance at the damage done. Certainly, they made me happy not to have been caught in a major storm on the lakefront of Chicago, near which I spent a fair amount of time.
All in all, a watchable natural disaster film (and, yes, there is a human factor in the form of a malevolent hacker). It is not in the " Top Ten of the Year", but it should provide some satisfaction to others like myself, who like our natural disasters to be limited to the screen.
One person found this helpful

David C SchreiberReviewed in the United States on June 7, 2022
5.0 out of 5 stars
Hard to find
Verified purchase
Of the three movies Category 6,7,and 8. This is the one you can’t see on any streaming device. These three movies are great

EniloracReviewed in the United States on December 19, 2006
4.0 out of 5 stars
Good as Disaster movies go but somewhat contrived
Verified purchase
I enjoyed this for what it was and the idea of 2 mega storms was interesting. i have one complaint though - we played this on a computer and part way through it suddenly jumped to the titles and we had to go into scene selection to complete the viewing. The story line and acting were ok and i liked the fact that there was a build up to the actual disaster which allowed the charcters to become more real. The action was a bit contrived though and while i can see people being so silly, i hardly think that they would be so blase about it all. Still, all in all, i would recommend this to people who enjoy disaster movies.
12 people found this helpful

SvenReviewed in the United States on February 15, 2008
4.0 out of 5 stars
Nice BUT--I have #1 complaint
Verified purchase
Alright, I don't usaully review stuff like this but in this case, I REALLY had to. The movie was great, although not all the CGI was spot on. But that's not my complaint. My complaint is that they are calling that "Tommy Tornado" a REAL storm chaser....
Now despite what is seen in the Movie "Twister" that's NOT how REAL storm chaser act!!
First of all when in comes to professional Storm Chasers, SAFETY is ALWAYS first!!! He took WAT to many risks. You NEVER let your guard down and you NEVER get that close unless you are sure your location is secure.

Anyways, that's what I wanted to mention.
No--I am not downing the movie or anything. I really liked the movie....it was just that false Storm Chaser was incredibly insulting to those of us who are actually a part of the official Storm Chaser, and Spotter Networks.

That's all.
But it's still a great movie. I will watch it again, despite the annoying chaser, the effects were neat. I LOVED the opening scene of the tornadoes destroying Las Vegas--

It's a long movie, but it keeps you interested through the entire movie. The special effect are pretty amazing. I'm not one for disaster movies, but there was more than just the storm story line, there were some great B and C storie lines in this movie. I have seen 10.5 and this is a better quality film then 10.5.

I would highly recommend buying this movie.
3 people found this helpful
See all reviews
Back to top
Get to Know Us
Make Money with Us
Amazon Payment Products
Let Us Help You
EnglishChoose a language for shopping. United StatesChoose a country/region for shopping.
© 1996-2022, Amazon.com, Inc. or its affiliates