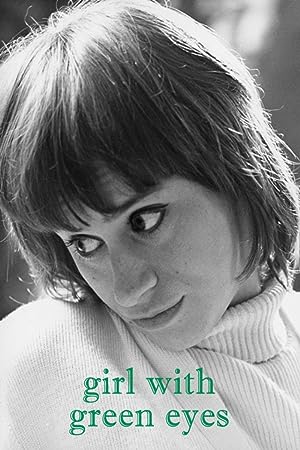 (46)
6.91 h 32 min19647+
A plain, young woman leaves her father's barren farm in County Clare to come to Dublin, where she gets a job in a grocery and shares a flat with an old pal from Catholic school.

David AllenReviewed in the United States on October 6, 2019
1.0 out of 5 stars
Rather disappointing
Verified purchase
I am a real fan of Peter Finch in many of his films but this is certainly not one of them.The character he plays is
quite loathsome and the general portrayal of the young girls and their “coming of age” in 196O’s England is
very dated.I know many people will enjoy this curiosity but my copy has gone out with the garbage.

Richard LaughlinReviewed in the United States on May 7, 2009
5.0 out of 5 stars
an overlooked gem
Verified purchase
London's Time Out film guide has remarked that although many of the early sixties British kitchen sink dramas don't hold up well, this little flick has stood the test of time. It concerns a young girl who falls for someone who turns out to be unsuitable for her. It's a fairly common theme, but the filmmakers carefull attention to detail makes it seem fresh. Rita Tushingham never hits a wrong note as the title character,a collen struggling to become an adult with all the gauchness of youth. Lynn Redgrave is also good as her somewhat freespirited best friend. Peter Finch's performance is rather problamantic. He is somewhat remote and detached-but perhaps that's what the script called for. and although he lets the girl down in the end, he is not presented as a villian. He even warns the girl at the begenning that their affair probally won't work as they are so diifferent. But as so often in love affairs, Tushingham has to learn the hard way. A very refreshing performance.
10 people found this helpful

Hara SeltzerReviewed in the United States on December 17, 2012
4.0 out of 5 stars
True to the spirit of Edna O'Brien's novel
Verified purchase
Poignant and pleasing film of two Irish country girls who move to the city seeking freedom and
romance. A very young Lynn Redgrave and Rita Tushingham are the girls, Peter Finch is the
older, experienced lover.

Amazon CustomerReviewed in the United States on May 26, 2017
5.0 out of 5 stars
Five Stars
Verified purchase
Wonderful movie for the era. Takes me right back to 1963 and the British Invasion. A classic.
3 people found this helpful

pamela j eichlerReviewed in the United States on March 24, 2013
1.0 out of 5 stars
I hate it
Verified purchase
the movie was awful, it was in black and white i have watched Irish movies much better than this one.
One person found this helpful

book loverReviewed in the United States on August 29, 2018
4.0 out of 5 stars
(3.5 stars) Slow moving but a good story...
This movie is about a young Catholic woman (Rita Tushingham) in Ireland brought up religious who meets an older man (Peter Finch) -- probably atheist -- who she later finds out is estranged from his wife (his wife moved to the USA). Her religious upbringing holds her back from sexual intimacy outside of marriage and gets in the way of their relationship. There's an interesting scene when a priest tells Tushingham's character that she can't see this man anymore and a lot of religious nonsense, at the same time pardoning her father for being a drunkard; apparently being a drunkard is excused but her relationship with this man is against God; and besides, at this point in the movie, they hadn't even had sex yet. Not much happens in this movie but I find Tushingham an interesting and likeable actress, sort of like an Audrey Hepburn lite (less perfect and more approachable to the average guy). I'm giving it 3.5 stars, pushing towards 4 stars.
One person found this helpful

Stephanie De Pue MurphyReviewed in the United States on September 15, 2012
3.0 out of 5 stars
Worth Seeing, But It Should Have Been in Color
"The Girl with Green Eyes," (1964), a brisk 92 minute bittersweet romantic drama, plays itself out in Dublin, Ireland, and vicinity, where it was filmed, oddly enough in black and white. Considering that it makes rather a lot of its titular character, a girl with green eyes - which we cannot see. And that viewers are always conscious of the film's setting in Ireland, a land that's widely known to be green. The movie was a production of the British Woodfell Films, the makers of [[ASIN:B00005S8KV Saturday Night and Sunday Morning]], [[ASIN:B001D07QEO A Taste of Honey]], and [[ASIN:B00005AUKE Tom Jones]], and was supported by the Irish Film Board.

It's a coming of age story, based on [[ASIN:0452283752 The Lonely Girl]], a novel by prize-winning Irish author Edna O'Brien, who also wrote the screenplay. It won a Golden Globe for Best Foreign Language Film. It was directed - it was his first feature --by Desmond Davis, ([[ASIN:B000KJQ4Q0 Clash of the Titans (1981)]]), a protégé of acclaimed British director Tony Richardson, who gave us A TASTE, and [[ASIN:B000MQKPFC The Loneliness of the Long Distance Runner]]. And Richardson was yet to become the brother-in-law of one of its young stars, Lynn Redgrave, when he married her sister Vanessa.

We meet, in 1960's Dublin, Kate Brady, an awkward and naïve, young country girl, just coming off the farm. She's played by waifish Rita Tushingham, that not quite pretty, green-eyed favorite of the 1960s, (A TASTE, THE GIRL WITH GREEN HAIR). Kate has just moved in with her best friend, the much livelier, funnier, more outgoing and sophisticated Baba Brennan, played by a young, fresh Lynn Redgrave ([[ASIN:B0009I8QHC Georgy Girl]]). Together they meet Eugene Gaillard, a middle-aged, well-to-do, land-owning, sophisticated writer, played by Peter Finch (an Oscar and Golden Globe winner for [[ASIN:B000I5SY9Q Network]]). However, Gaillard, who happens to be already married, with a child, although separated - by the Atlantic Ocean, as well as other issues-- is immediately attracted to shy Kate, and ignores the apparently more knowing Baba. And Kate is attracted right back to Gaillard. The two quickly become entangled in an intense love affair, which doesn't play well with Kate's rural family when they get word of it. But Kate does emerge older and wiser. Other well-known players inhabiting parts here include Julian Glover, T.P. McKenna, Marie Kean and David Kelly.

In this picture, Davis's work strongly resembles his mentor's, perhaps in part because composer John Addison, who scored GIRL, also scored Richardson's TASTE, and LONELINESS. It gives the viewer a very close, black and white look at the Dublin, and the Irish countryside, of the early 1960s. Tushingham was perhaps at the height of her popularity at this time: her piquant face seemed to fascinate filmmakers and to embody the `kitchen sink' working class dramas so emblematic of the rebellious era. There's no question but that the picture hangs on Tushingham's appealing, deeply felt performance, though both Finch and Redgrave turn in strong performances as well. Worth seeing, though it should have been made in color.
5 people found this helpful
See all reviews
Back to top
Get to Know Us
Make Money with Us
Amazon Payment Products
Let Us Help You
EnglishChoose a language for shopping. United StatesChoose a country/region for shopping.
© 1996-2022, Amazon.com, Inc. or its affiliates