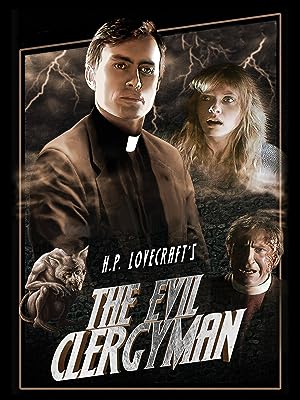 (51)
6.729min201218+
In 1987 Charles Band directed "PULSESPOUNDERS", an anthology film comprised of three 30 minute sequels to the biggest hits of Empire Pictures: "H.P. LOVECRAFT's THE EVIL CLERGYMAN", a "TRANCERS" sequel, and a sequel to "THE DUNGEONMASTER". "PULSEPOUNDERS" was shot and edited in 1988 before circumstances prevented it from being released.

Steve V.Reviewed in the United States on August 24, 2014
3.0 out of 5 stars
A Lovecraftian Freestyle
Verified purchase
After Stuart Gordon made a name for himself with "Reanimator" and "From Beyond", Charles Band saw opportunity in continuing to use Lovecraft properties as the basis for his features. Band then came up with the idea for an anthology of short sequels called "Pulsepounders" that was eventually shelved due to the financial troubles of his studio, Empire Pictures, which would eventually fold and give way to Full Moon.

25+ years later and we finally get to see Band's attempt at a Lovecraft film and the results are... um, interesting. The problem is that this short isn't much of a Lovecraftian story nor does it deal with any of the themes that preoccupied the author's stories. Instead, this more of a Lovecraft freestyle with various elements and iconography mixed in with the standard horror tropes. The film survives mostly on the strength of a small, dedicated cast that includes David Gale as a Brown Jenkins. Jeffrey Combs, Barbara Crampton and David Warner acquit themselves nicely as well.

The best part of the film is the implied violence, sexual degradation and homosexuality that gives the proceedings an eerie quality. It's all VERY implied, but it's interesting at least. Be aware that the film is sourced from a VHS work, so image and sound are both pretty poor. This is definitely only for seasoned Lovecraft or movie fans.

Jerry BenjaminReviewed in the United States on February 15, 2020
4.0 out of 5 stars
Love old Empire Pictures Lovecraft flicks? Then get it!
Verified purchase
I'm a sucker for the old Lovecraft adaptations from Empire Pictures - REANIMATOR, FROM BEYOND, etc. While this isn't quite up to the level of the ones Stuart Gordon directed, it's pretty solid and definitely a flick to catch. Thought lost to the ages after the original negative went missing, you can now see it here in a semi-restored way. Recommended.

wadeReviewed in the United States on June 17, 2013
5.0 out of 5 stars
waited a long time to see
Verified purchase
when you see a H.P. Lovecraft film.. you cannot go wrong by watching it... they are really great! when you have Jeffrey Combs and Barbara Crampton in it... you have a great work of art. this film was made several decades ago and has been finally released to DVD. after having seen Reanimator with combs and crampton this was really over the top and fantastic. but The Evil Clergyman doesn't quite come up to reanimator, but is really not that bad of a movie. Basically this film is about a love story between a clergyman and beautiful woman. how far will one go when they love one another? A scene in the film that may have been censored was where barbara was laying on her bed and a small twisted rat/man kisses her butt... quite weird and utterly perverse. this scene has surely been cut but maybe sometime there will be a later un-cut version with the entire deleted scene. another film : The BeYond is quite entertaining and stars both combs and crampton... hopefully they have not retired from making more films.. one can only hope?
4 people found this helpful

john boyerReviewed in the United States on April 17, 2013
5.0 out of 5 stars
h.p.lovecraft's the evil clergyman
Verified purchase
in 1987 charles band directed pulsepounders an anthology film comprised of three 30 mins sequels to the biggest hits of empire pictures h.p.lovecrafts the evil clergyman,trancers sequel,and a sequel to the dungeonmaster.pulsepunders was shot in 1988 before circumstances prevented it from being released.in addition the original 35mm negative for the 3 episodes has never been found.for the last 25yrs,fans have been excited to see any footage from this lost treasure.in 2011 a pulsepounders work print on vhs was discovered.charles band and a team of digital experts have been working for the last year digitally restoring it. the first of the lost pulsepounders episodes to be restoredh.p.lovecrafts the evil clergyman re-unites horrors hottest duo jeffrey [re-animator] combs and barbara [re-animator]crampton also stars horror legends david warner and david gale.now that you have back ground info on the movie lets talk about the dvd.it run 30 min,it unrated,special features 60 seconds of un-restored footage from the pulsepounders trancers sequel due out in oct on dvd,as trancers 1.5 .so if your a fan of jeffrey combs or fullmoon movies this is a must buy.until next time.
7 people found this helpful

chrisReviewed in the United States on November 26, 2014
4.0 out of 5 stars
Lost Lovecraft gem.
Verified purchase
What can I say? This is a small classic from an era we will never see again. Nice twist on the short story. As is often the case this movie twists two completely different story lines into one. Not that I'm complaining because the chemistry between the two leads makes them the Spencer Tracy and Catherine Hepburn of trashy slasher gore bucket Lovecraft gems.

Amazon CustomerReviewed in the United States on December 29, 2019
2.0 out of 5 stars
ok movie with some decent acting
Verified purchase
another movie that is only loosely inspired by Lovecraft. A so-so movie that thankfully isn't very long.

ihredpowerReviewed in the United States on March 21, 2016
4.0 out of 5 stars
HPL collectors will want this.
Verified purchase
I purchased this so I had it for my HPL collection. It is a tad on the "Boobs and beasts" side of things, but it is still well done, and as usual, the actors are just some of the best. Worth the price, and worth having to round out your collection.
One person found this helpful

Sci Fi LoverReviewed in the United States on February 23, 2014
4.0 out of 5 stars
Evil Clergyman
Verified purchase
I thought it was a bit too short. Jeffrey Combs was great as the Evil Clergyman who committed suicide but his spirit/soul remained to reek havok on his girlfriend. David Warner was superb as one of his victims. David Gale played a rat with a human face who helped the Evil Clergyman with his schemes.
One person found this helpful
See all reviews
Back to top
Get to Know Us
Make Money with Us
Amazon Payment Products
Let Us Help You
EnglishChoose a language for shopping. United StatesChoose a country/region for shopping.
© 1996-2022, Amazon.com, Inc. or its affiliates