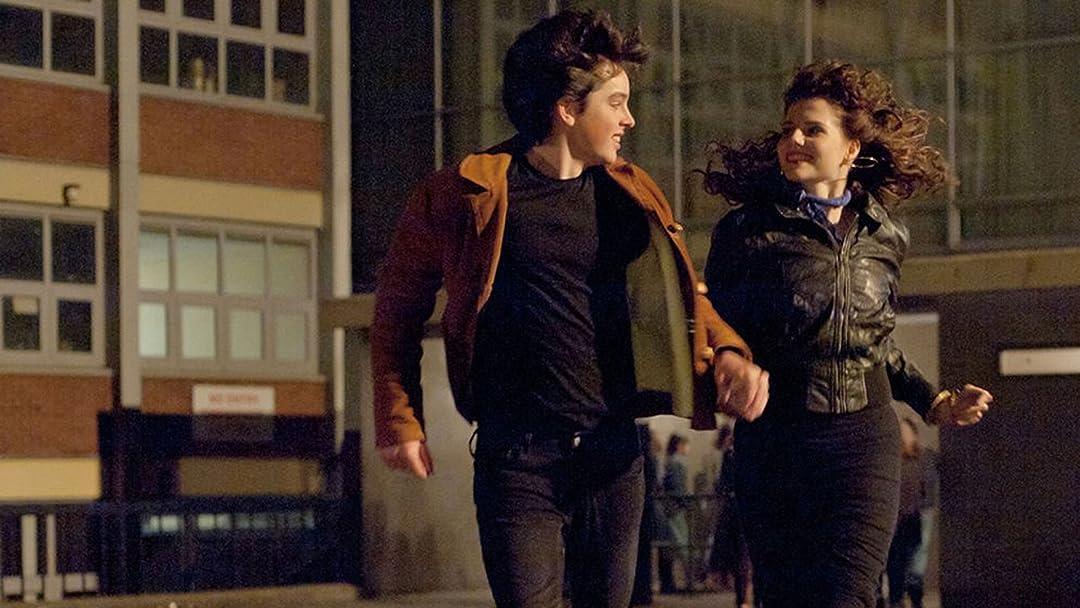 Doc SarvisReviewed in the United States on September 21, 2016
5.0 out of 5 stars
More Than Meets the Eye
Verified purchase
As one can read from the reviews here, SING STREET is a thoroughly enjoyable, "feel-good" film. Anyone who remembers the MTV-fueled 80s "modern music" scene will find plenty of nostalgia here. The new music is interspersed with 80s standards, and holds up completely..."Drive It Like You Stole It" should be smash hit in any rational universe. On one level, it's a wonderful throwback to 80s films.

But there's more to this movie than that...a fact that reveals itself more and more on repeated viewings. First of all, every character has a dark reality, that is only hinted at in the various scenes. Paying attention to the dialogue will reveal some subtle, startling insights.

More importantly, this film blurs the line between fantasy and reality in the character's lives. It's obvious in the "Drive It" performance, but it's there throughout. How much is really happening, versus what the characters are imagining? I was actually reminded of Terry Gilliam's work in that respect.

Without giving anything away, let me just ask: Did the ending (about which many have commented here) really happen the way we see it? There's a foreshadowing of the ending during the first few minutes of the film, that suggests that the outcome was altogether not what we think it is.

If none of this make any sense (and it might not since I am determined not to give away any spoilers) the movie is completely delightful on its basic level. That's one of the great things about it, and i loved it. But there's more lurking under the surface that will justify repeated viewings...

The All-Seeing IReviewed in the United States on April 27, 2020
5.0 out of 5 stars
Music-Driven Coming-of-Age Triumph
Verified purchase
With "Sing Street," director-screenwriter John Carney ("Once") serves up another wonderfully crafted film melding the enduring glory of the pop song with the trials and triumphs of love and family.

We're back to the future of '80s nostalgia made contemporary as awkward but erudite young Dubliner Conor (Ferdia Walsh-Peelo) dodges his parents' divorce and the nutters at his Christian Brothers school, forming a pop band out of thin air to impress the lovely Rafina (Lucy Boynton). They can't play, but older brother Brendan (Jack Reynor) is undeterred: “Did the Sex Pistols know how to play? Who are you, Steely Dan?” Let's hope not.

Early alt-rock anthems pair with fresh song craft in this warmhearted coming-of-age movie. "Sing Street" is essential viewing for music lovers forever young at heart. - (Was this review of use to you? If so, let me know by clicking "Helpful." Cheers!) - WATCHED IT? THEN WATCHLIST: [[ASIN:B009NXV51S "Almost Famous,"]] [[ASIN:B07JVSYPZ7 "Stadium Anthems,"]] [[ASIN:B002YCEZVW "24 Hour Party People."]]
5 people found this helpful

KentonReviewed in the United States on September 10, 2016
5.0 out of 5 stars
Once More?
Verified purchase
From Once writer/director John Carney comes secret reboot Sing Street. He sure knows how to write and direct movies about motley outcasts starting bands in Ireland.

On the one hand this movie bottles (at the source) a perfect cocktail of uniquely, or nearly uniquely, teenage feelings. The belief not just in the possible but in the inevitable, in the – dare I say it – destined.

On the other hand, I do have to dare to say it, because the successes of this movie highlight the distance I have traveled, drifted rather, from a place where destiny, where getting the girl through the power of music, where love can cross all boundaries, or at least the Irish Sea, where losers can become kings, seemed possible, let alone destined. And again that is based on this film’s success. I imagine the cynics, if not converted, will have a harder time buying into the cheesiness of this movie than the rest of us. And I don’t bunch myself in with the rest of the cynics there, because I do bunch myself in with the converted.

This movie might be tropey, it might check all of the boxes that you would expect, but in doing so manages a few good left jabs with some of the most compelling and believable characters on screen in recent memory, (You can’t watch Paper Towns or The Spectacular Now without wondering whether or not Hollywood knows what kids are anymore) with awkward moments, and anger, and sadness, in perfect measures, and moments, the sort that we can believe in because we’ve had them before. And then a good clean right hook of an original soundtrack to follow that up.

Some of the best moments in the movie are when characters don’t understand what the hell other characters are talking about. Someone says something profound in The Fault in our Stars and everyone just goes wow, or worse, acts like that’s the way everyone talks all the time. Someone says something a bit complicated in Sing Street and characters argue about what it means, or call it stupid, or pretentious. It pulls you in like that. “I’ve been there. This was me. I had no idea what I wanted. But I wanted it anyway. I had no idea where I was going. And yet I went.”
9 people found this helpful

Tom StitzerReviewed in the United States on May 30, 2021
5.0 out of 5 stars
Another wonderful real musical from John Carney
Verified purchase
Just as in Once and Begin Again, John Carney creates a story where the main character is “the music.” The songs created feel real and fit the characters and settings, becoming such an integral part of the story.

Sing Street is a great coming of age story where a young boy is discovering the music of the 80’s and a romantic interest, all while learning how to write and play said music. Does he learn how to play too quickly? Does his band become really good so fast? Does he write too many catchy songs totally capable of being in the top ten with virtually zero experience? Yes to all of those but you’re not here for reality. You’re here for a fun ride. You’re here to see a great story of a character trying to follow his dreams and THAT is what you’ll get.

RevBill60Reviewed in the United States on August 3, 2016
5.0 out of 5 stars
First class entertainment and more...
Verified purchase
A fun, meaningful movie about doing your best to move forward in life. "Effort does not always produce joy, but there is no happiness without intelligent effort"(*) -- Sing Street illustrates the truth of that statement. From start to finish, this movie proves more than well worth watching. Not only is the movie a quality production in every respect but also, and importantly, it portrays an inspiring, feel good story. Sing Street is more than enjoyable enough to watch time and time again! Every aspect of this film is superior. I heartedly recommend its viewing and, perhaps, you will want to add it to your collection of excellent entertainment.

R. Reviewed in the United States on March 9, 2020
4.0 out of 5 stars
charm city
Verified purchase
this director definitely has a lane. and he knows how to drive it. full of charm and spunk and humor. the music shines. ireland as a back drop is a wonderful up close look at middle class misery in the 80s, with a pop MTv background providing some levity. some special relationships between brothers and bandmates here and of course a special girl. i found this whole film to be utterly relatable. maybe you will too.

Timothy WatkinsReviewed in the United States on August 19, 2016
5.0 out of 5 stars
Fun, funny, feel-good movie with fun music
Verified purchase
Love this film. I've seen it three times. It's actually better after first viewing because there are two things that gave me a little anxiety during the first watch that I didn't have to worry about upon subsequent viewings. *Light spoiler alert: you feel good after watching it. That should be enough to let you enjoy your first viewing.
It's just a fun, funny, feel-good movie with fun music from the 80s. There are some dramatic parts that give you the feels, and some deep stuff if you pay attention - enough to make this a great movie, and not just fluff. It's about young love, and finding yourself, and making music, and friends and family relationships.
The Weinstein Brothers picked it up as executive producers, so let's hope that we'll see it during awards season. Those guys know good films that win prizes. Made by John Carney, who also made Once and Begin Again, two other great films about making music. But this one is his best.
Highly recommend.
8 people found this helpful

CJPReviewed in the United States on September 23, 2018
5.0 out of 5 stars
Unexpectedly charming romantic comedy
Verified purchase
I remember seeing reviews of this film when it first came out, but it wasn't until a family member recommended it that I actually saw it. Even then, it took me a while to make the connection, because from the printed reviews I hadn't expected the hero and heroine to be high-schoolers.

Never mind. The dialogue snaps, the lead characters are adorable, and with a small allowance for movie magic the relationships and situations feel real. Now, if only all high-school bands played that well....
See all reviews
Back to top
Get to Know Us
Make Money with Us
Amazon Payment Products
Let Us Help You
EnglishChoose a language for shopping. United StatesChoose a country/region for shopping.
© 1996-2022, Amazon.com, Inc. or its affiliates