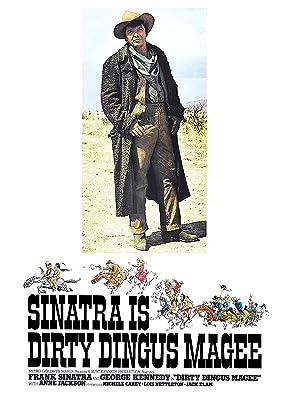 (213)
5.21 h 30 min1970PG-13
The ways of the West are outrageously unsaddled in this rowdy comedy. Sinatra – always in red-flannel longjohns when it’s time for boudoir activity – plays ring-a-ding Dingus.

J. MunyonReviewed in the United States on October 12, 2014
3.0 out of 5 stars
B-movie just meant to be fun, nothing taken seriously, relax and put your brain in neutral
Verified purchase
Frank Sinatra as Dingus Magee, George Kennedy as Hoke Birdsill, Anne Jackson as Belle Nops, Lois Nettleton as Prudence Frost, Jack Elam as Wesley Hardin (spoofing real-life outlaw John Wesley Hardin), Michele Carey as Anna Hot Water, John Dehner as General George, Henry Jones as Reverend Green, Harry Carey, Jr. as Charles Stuart, Paul Fix as Chief Crazy Blanket, and Terry Wilson as the unnamed Sergeant.
This is meant to be a comedy farce and yet offers better than expected costuming, sets, cast, & continuity of theme. On the other hand, had Jerry Lewis of 1966 to 2010 MDA telethon notoriety been the title star, this movie wouldn't have been worth a pinch of spit. Not bashing Jerry Lewis necessarily, just pointing out that Frank Sinatra was a better fit. Tim Conway wouldn’t have been as good as Frank Sinatra, and I am a huge fan of Tim Conway’s character acting and humor. Similarly, Don Knots wouldn’t have been right for this film either.
That said, I also admit that Frank Sinatra didn’t put much effort into this film, letting the supporting cast carry the film instead, as if he were deliberately holding back.
The film is loosely based upon a book, negatively mocks the military, comically idealizes whores and a whore house, and the best part of this movie is the American Indian maiden named Anna Hot Water. This isn’t meant for easily offended die-hard fans of serious westerns. It is a slapstick spoof of ridiculously absurd situations meant to be viewed without engaging much of your intelligence, in fact the less intelligence you use, the more you will be able to relax and just laugh. It also helps to keep in mind this is a 1970 film. There isn't any reason for this movie to be rated R, however, parts of it may not be appropriate in a strict Christian home with impressionable children (are there any of those really?).
Not quite up to par with “Support Your Local Gunfighter” (James Garner) or “Trinity Is Still My Name” (Bud Spencer / Terence Hill), or “Blazing Saddles” (Mel Brooks), or “F-Troop” (Forest Tucker / Larry Storch / Ken Berry), or some of the spaghetti western comedies of forty years ago.
I’m not sorry I bought and watched this film, and haven’t thrown it away yet. I can’t say that for all the DVD’s I’ve bought and watched.

B. BrownReviewed in the United States on October 13, 2019
5.0 out of 5 stars
Great, Great Movie.
Verified purchase
This is one of my husbands favorite movies. Very entertaining and funny. Packaged well and it played as expected.

David E. BaldwinReviewed in the United States on July 6, 2015
5.0 out of 5 stars
Hoboken Cowboy
Verified purchase
This is an uproarious Western parody at turns raucous and bawdy. The fun is so infectious that Frank Sinatra in the title role seems to be having a great time. The Chairman of the Board demonstrates adeptness at broad comedy which is genuinely surprising showing a side of himself that I've never seen before. Terrific comic ensemble with George Kennedy as a dopy sheriff and Lois Nettleton as a randy schoolmarm as standouts. A laugh riot from start to finish.
3 people found this helpful

Klondike MatisseReviewed in the United States on February 6, 2020
5.0 out of 5 stars
One of the funniest movies ever !
Verified purchase
Combine cowboys, Indians, a whore house that caters to many cavalry men including their commander and the worst thief in the old west(Frank Sinatra) and you get a Very Funny movie ! Check it out and I feel you will laugh out loud.

Kindle CustomerReviewed in the United States on December 6, 2018
5.0 out of 5 stars
GREAT
Verified purchase
LOVE THIS SHOW
One person found this helpful

annieReviewed in the United States on August 6, 2020
5.0 out of 5 stars
Good movie
Verified purchase
received this movie in a fairly timely matter, enjoyed watching it.

ANReviewed in the United States on April 6, 2021
5.0 out of 5 stars
Delivered as promised.
Verified purchase
Delivered around the date it was promised. Good packaging with no damage to the DVD. A western comedy with many familiar faces. An enjoyable movie from an era of movie-making gone by, never to return.
See all reviews
Back to top
Get to Know Us
Make Money with Us
Amazon Payment Products
Let Us Help You
EnglishChoose a language for shopping. United StatesChoose a country/region for shopping.
© 1996-2022, Amazon.com, Inc. or its affiliates