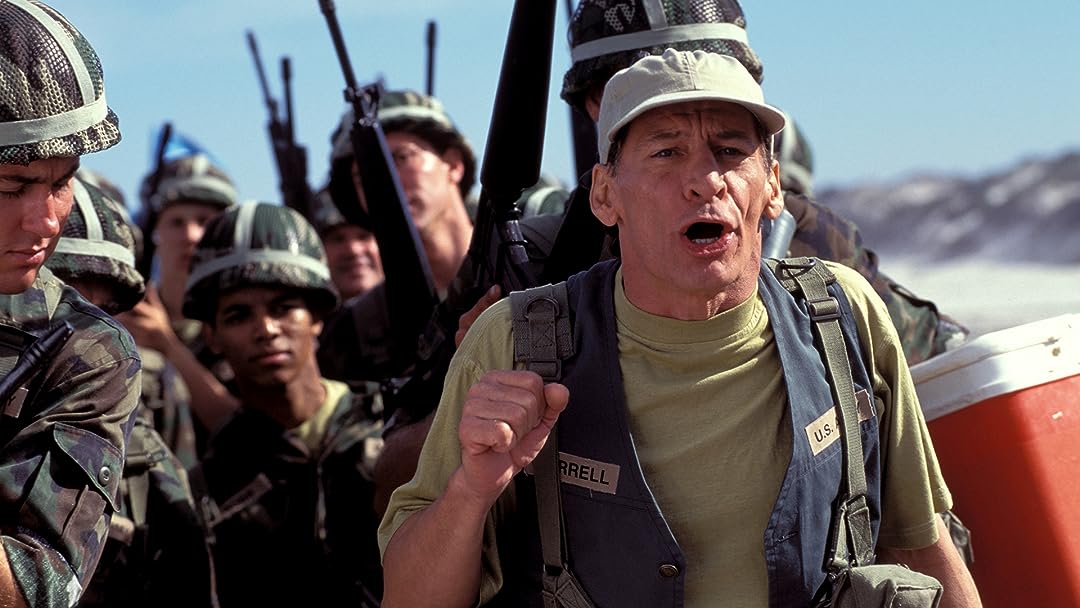 Ernest in the Army

Jim ParkerReviewed in the United States on December 27, 2018
4.0 out of 5 stars
Classic Ernest
Verified purchase
If you know Ernest:
If you know and love Ernest you will get more of his silly/stupid humor in Ernest in the Army. If you enjoy other Ernest movies you will likely enjoy this as well, though it has a bit less of his typical shenanigans like dressing up. I recently was looking up Ernest things and apparently, there is an order to watch the movies in because they have their own over-arching story of him growing up. This is the last one where he is basically an adult now. While this is the last Ernest movie I'm not sure if there would have been more had he not died when he did.

If you aren't familiar with Ernest:

The character of Ernest initially appeared in commercials for things like ice cream and soda and they were all stupid/silly funny. Then they made several movies where the Ernest character gets into a variety of situations and he stumbles his way through them in silly/stupid ways that typically involve him getting hurt at some point and everything working out in the end. Each movie has a general theme like teamwork, never giving up, don't cheat, etc.

This movie starts with Ernest hanging out with his friend in the Army. Ernest wants to drive Army trucks so he enlists in the Reserves just in time to be sent on a UN mission to stop a terrorist from launching a missile. It has a lot of comedy and it's fun and enjoyable for the family. I grew up watching Ernest and while I still enjoy them as an adult I admit they aren't quite as good as when I was a kid, but they are still decent if you enjoy the silly/stupid funny type movies. It's not great, and I think they could have done it better, but still very enjoyable. I don't know anyone else who can turn a pancake into a weapon.

VilkathReviewed in the United States on December 4, 2018
3.0 out of 5 stars
Not the best Ernest movie, but not the worst either.
Verified purchase
Ernest in the Army is not up to the same level as Goes to Jail, Goes to Camp or even the Halloween one. It's a bit more tame, Ernest doesn't do nearly as many dream sequences or impressions nor use insane gadgets. That said it's still fairly funny and the plot is actually more realistic. I think the actor who plays Ernest is just getting a bit old in this movie, he didn't seem nearly committed to the physical prop comedy as usual.

That said it's still pretty good and the supporting cast really step it up in this episode. The General and his Aid, the bad guy etc pick up the lacking comedy. It's also one of the few Ernest video's available on Prime atm, so it's better than nothing.

Amazon CustomerReviewed in the United States on July 31, 2002
4.0 out of 5 stars
Almost too real
Verified purchase
This movie finds Ernest as a ball retriever at a driving range with aspirations of driving army trucks like real army people. His buddy assures him that if he joins the reserves, he can party every weekend while driving the big green trucks. So Ernest joins up. But coincidentally, his unit suddenly gets called up and sent to the Persian Gulf as peace keepers monitoring a border dispute. The border dispute goes rapidly out of control, and Ernest winds up on the front lines. The fate of the civilized world is in his hands!
Given the theme, it's not surprising that this movie is a bit more violent than Ernest's standard kids' fare. Guns actually get fired (but not by Ernest) and people fall down. If you are familiar with the Middle East or the army, you will find lots to laugh at in this movie. However, the overall plot almost comes across as too real these days to be as preposterous as it was originally intended.
9 people found this helpful

SanteeFatsReviewed in the United States on July 14, 2013
4.0 out of 5 stars
Funny
Verified purchase
Yeah the Ernest movies can be very stupid but I like them. You know what to expect before you start to watch so if you hate it don't watch it. They allow someone to just let go and enjoy stupid, inane plots with all's well that ends well endings. Ernest is always a loveable, well meaning oaf who complicates every thing but manages to get things to come out well. Playing reservist water boys who are activated and sent to some desert in some who knows where, apparently Arab country, they screw everything up but paint the target for the jets at the end.
2 people found this helpful

fishfearmeReviewed in the United States on August 14, 2019
5.0 out of 5 stars
Love Ernest
Verified purchase
Our family loves Ernest this was one we didn't have. More serious subject than most Earnest

its meReviewed in the United States on December 28, 2019
5.0 out of 5 stars
Ernest never gets old!!!
Verified purchase
Classic!

Virginia CopelandReviewed in the United States on January 5, 2018
4.0 out of 5 stars
Earnest Ernest!
Verified purchase
Funny and fun, what you'd expect from an Ernest movie. Silly and not intellectually complex, just right for kids and family time.

CrazyredheadReviewed in the United States on November 19, 2019
3.0 out of 5 stars
Crazy
Verified purchase
Ok
See all reviews
Back to top
Get to Know Us
Make Money with Us
Amazon Payment Products
Let Us Help You
EnglishChoose a language for shopping. United StatesChoose a country/region for shopping.
© 1996-2021, Amazon.com, Inc. or its affiliates