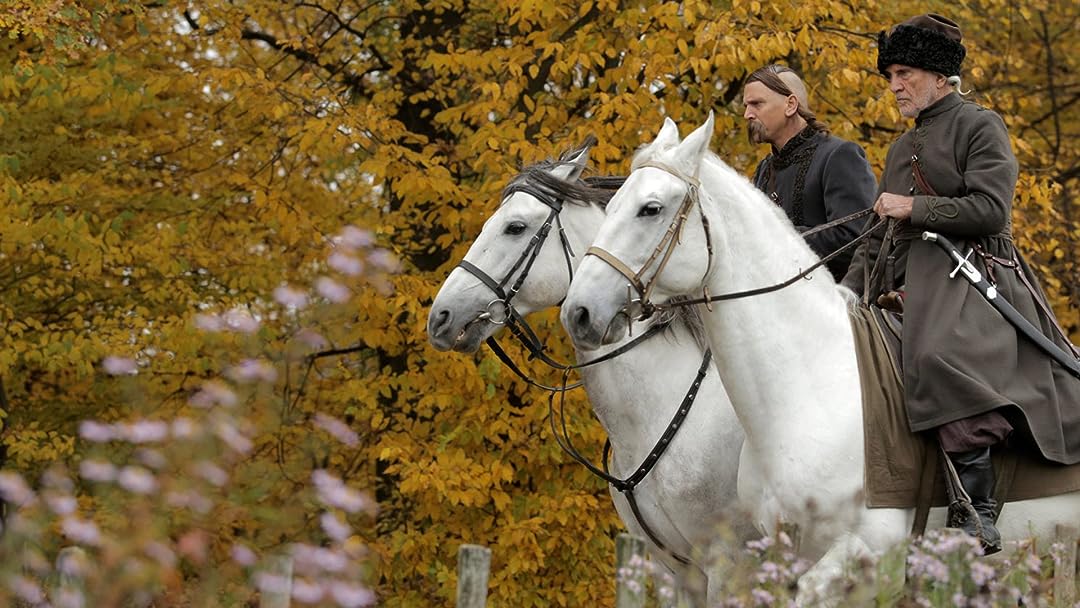 (247)
6.01 h 43 min2017R
Set against the explosive, war-torn backdrop of Ukraine, this action-filled epic follows a young artist as he battles famine, imprisonment, and torture to save his childhood love and free his country.

Tatyana MReviewed in the United States on June 29, 2018
5.0 out of 5 stars
My great grandmother was locked up in a cellar filled with ...
Verified purchase
It was hard to watch this movie, but it portrayed the tragic reality of Holodomor. My grandmother told me how she survived those two horrific years of 1932-33. They ate everything they could find. All the grain and food was seized. My great grandmother was locked up in a cellar filled with icy water for 3 days for not making the quota of food requirement and a month later she died of pneumonia. My grandmother was a young student at college studying to be a teacher. One time she lost consciousness in class because of starvation. A good teacher was able to get her a small daily ration for being an excellent student. It saved not only my grandmother's life, but her family as well. That's how Stalin forced Ukrainian peasants to join collective farms and accomplished his so called collectivization-by starving them to death. Memory eternal to all victims of Holodomor!!
36 people found this helpful

Jack E. LevicReviewed in the United States on October 11, 2017
3.0 out of 5 stars
TRAGIC STORY OF THE UKRAINIAN HOLODOMOR
Verified purchase
BITTER HARVEST attempts to tell the story of one of the saddest and the most brutal genocides of the 20th century. Unfortunately, there were many genocides in the 20th century but the tragic story of Ukraine is often overlooked. In the 1930's, Soviet dictator Joseph Stalin attempts to reign in the Ukrainians with the Holodomor--death by starvation. Millions died over the next few decades as BITTER HARVEST tells the story of one peasant and his village.

Yuir (Max Irons) is a young boy in love in a small idyllic village in Ukraine. The villagers work hard but food is plentiful in an area known as the bread basket of Europe. Soon the peace is shattered as the soviet Red Army begins a reign of terror. The people are forced into starvation and hope seems to be lost. It's a tragic story that should have been told in a more insightful manner than BITTER HARVEST provides.

It is a tragic story that needs to be told. BITTER HARVEST tells a simplistic story centered around a love story. It's never exactly clear why Stalin starves the Ukrainian people but does an absolute madman need a reason? Yuri's tiny village seems to have more soldiers squeezing it into submission than it has inhabitants, yet life goes on. As Yuri moves to Kiev we see most people survive but yet others die on the street of starvation. What exactly is happening is not always clear.

BITTER HARVEST lacks depth and heart at times. I could have lost interest early but I waited for more of an explanation of Stalin's action and how the Ukrainian people fought to survive

Bohdan HodiakReviewed in the United States on September 5, 2017
4.0 out of 5 stars
Actual History Dramatized
Verified purchase
Some critics jumped at this film like a pack of wolves, so I decided to get it and I am puzzled. It is well acted, the setting and staging are impressive and of high quality. The editing, photography and direction are good. The first half hour dragged a little for me. Perhaps I was not that interested in the romance of Yuri and Natalya. But the rest of the film went by fast, and what it recounted was heart breaking. Yes, this is no art film. It is a melodrama in the old Hollywood tradition. If you can accept that you will find the film interesting. It takes place in the early 1930s in Ukraine, surrounded by the most tragic time for the Ukrainian people since Genghis Khan and his Horde destroyed the kingdom of Kyiv. The artificial famine created by the communists in 1931-1933 led to the death by starvation, according to the Encyclopedia Britannica, of six to eight million people. The Russians themselves in 2008, at the Russian State Duma, estimated seven million people had starved. This happened in what was known as the “bread basket of Europe,” So the events surrounding the fictional heroes of the film are all true and are recounted by historian Robert Conquest in his fine book “Harvest of Sorrow.” Also, Anne Applebaum has just published “Red Famine, Stalin’s War against Ukraine.” to be available on Amazon next month. Yet while almost everyone knows about the Holocaust almost no one knows about the Holodomor, which in Ukrainian means death by starvation. A big reason is that it was forbidden to write or talk about it until the USSR collapsed. All the records on the Holodomor until then were locked up. A few brave journalists secretly went into Ukraine, such as Malcolm Muggeridge, Rhea Clyman, and Gareth Jones, who disappeared in Ukraine after some of his articles were published. Walter Duranty the New York Times correspondent, wrote lies about plentiful food and happy farmers, while the famine was raging. Comfortably residing in Moscow, he did not want to damage his access to Stalin and other communist functionaries. The following year Duranty was awarded the Pulitzer Prize, which the Times has still not renounced.
In 1933 the United States even offered to help with food but the Kremlin was exporting wheat and said everything was fine. It wanted to break the back of the independent farmers, take away their land, and herd them into collective farms.
The film recounts the story of Yuri and Natalya and their families trying to survive the “evil empire.” There are battles between the red army and the villagers though I think such events are “Hollywood.” At one point Terence Stamp, the well-known British actor, rides on a horse against the soldiers wielding a sword. Maybe the point is how defenseless the villagers and farmers were: swords against machine guns. Such resistance against the communist regime was quite common in Western Ukraine after World War II but not in 1933, as far as I know.
So we have a film with heroes and villains and quite a lot of action. But the action at the end seems more designed for the audience than giving us any deeper insight into the events. The film ends with Yuri and Natalia jumping into the river and swimming underwater trying to escape their pursuers. So I agree. This is not “Rome: Open City” or “Paisan” but a Hollywood-type melodrama. But as a window into one of the most dramatic events in modern history, and a pretty good melodrama, it deserves four stars. The film has all those high qualities going for it that I mentioned above but sadly, it needed a better screenplay. But how do you make a superior film about such a distressing event without turning the public away? The Ukrainians tried in 1991 with “Holod-33” or Hunger 33, and were not too successful. That film was based on the novel “The Yellow Prince” by Vasyl Barka, who was in his 20s during that time. The book is studied in Ukrainian schools today. Ukrainians, and those who left their country generations ago, are still trying to heal that wound , but not forget. A memorial service is held every year in St. Patrick’s Cathedral in New York
37 people found this helpful

Julian D. WynnyckyjReviewed in the United States on June 13, 2017
5.0 out of 5 stars
Holodomor Genocide against Ukraine by Moscow
Verified purchase
Stalin and his Bolshevik Russian chauvinist assasins perpetrated a genocidal campaign in '32-33 against the Ukrainian peasantry millions starved to death. Movie is a historical epic with a love story intertwined. Walter Duranty of the NY Times won a Pulitzer lying about this crime against humanity.
75 people found this helpful

PeachyPatReviewed in the United States on August 4, 2018
2.0 out of 5 stars
Historical look at the Russian take over of the Ukraine.
Verified purchase
I'm glad that t his movie was made but sad it was concentrated more on the love story than the bravery and sacrifice of the Ukraine people. I have never understood why people taking over an area must be so cruel to the native people. Why not try to work with them to show that you want to bring them into your system with care and kindness. Why create an enemy if you don't have to? And why for heaven's sake kill the very people that you need to produce the grain that you need?
As for this movie, why make a point at the beginning of the move that Yuri is different and not expected to be the warrior that his father and grandfather were; then turn him into an efficient killer. He certainly didn't pick up those fighting skills in prison. As usual, with this type of story, our hero manages to out wit, out fight and out last the bad guys. Also not very realistic. I'm hoping that there are better movies about this important subject.
4 people found this helpful

ironman96Reviewed in the United States on November 5, 2018
4.0 out of 5 stars
A Story That Needed to Be Told
Verified purchase
Finally, Hollywood has made a movie that brings to light some of the horrors of communism under the Soviet Union. This film portrays the horror of the Soviet induced genocide by starvation against Ukraine in 1932-1933 in which over 7 million were killed. The full nature of this genocide was only revealed since the fall of the Soviet Union. This movie dramatizes this tragic history through the life of a young Ukrainian man. The tragedy and cruelty of this event was so great, that this movie is somewhat difficult to watch. At the same time, it is a very important story to be told. Sadly, it seems as if a similar story is unfolding in Venezuela where communism and socialism reach their inevitable end-state.
2 people found this helpful
See all reviews
Back to top
Get to Know Us
Make Money with Us
Amazon Payment Products
Let Us Help You
EnglishChoose a language for shopping. United StatesChoose a country/region for shopping.
© 1996-2021, Amazon.com, Inc. or its affiliates