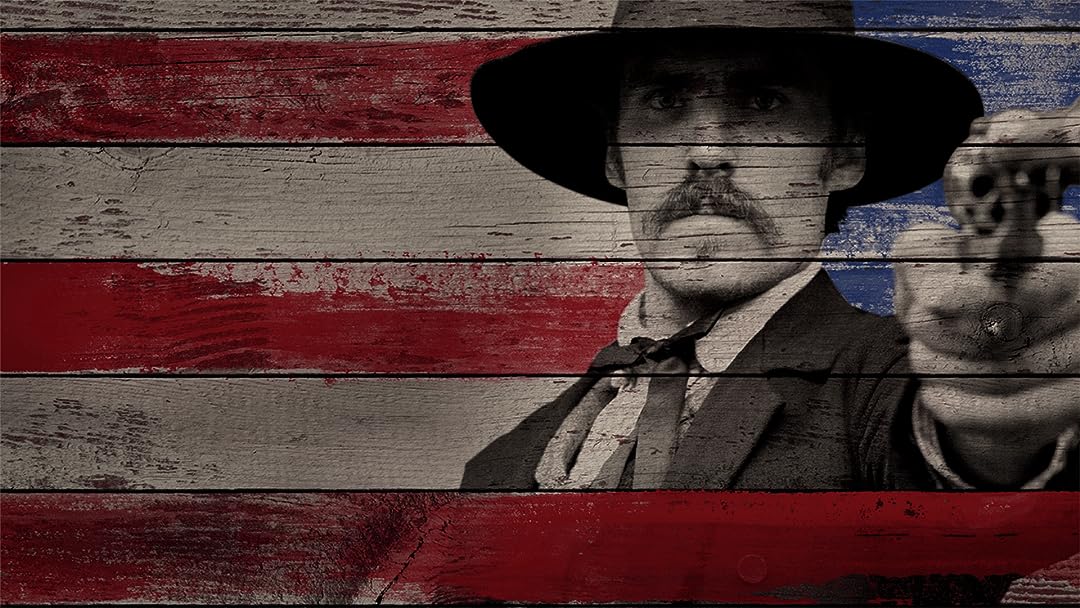 Season 1
(139)
2016X-RayTV-14
From Executive Producer Robert Redford, The American West tells the story of the aftermath of the Civil War and how the United States transformed into the "land of opportunity."

Lawrence RobertsReviewed in the United States on March 7, 2019
2.0 out of 5 stars
Grossly oversimplified, factually accurate (but very cherry picked, incomplete) Romanticized.
This was quite dissappointing given that Robert Redford produced it. I expected a much more discerning and in depth history, not just another collection of Jesse James, Billy the Kid, Wyatt Earp, Custer, Sitting Bull, and Crazy Horse lore.

I gave it two stars because it is factually correct, entertaining, and it does teach some history – but it is grossly over simplified and romanticized and not a very accurate portrayal of either Grants Presidency or the settling of the west. First of all, the documentary’s unifying theme that Grant sought to settle the West to salve the wounds of the Civil War seems incorrect. This is not advanced by Ron Chernow’s very thorough and detailed biography of Grant. The United States had been looking West since the days of Washington and Jefferson. The term “Manifest Destiny” (the settlement of the entire continent) became part of the national vocabulary in the late 1840s. In fact, the migration west was not inspired by the Civil War, it was interrupted by it. The issue of slavery in the new Western territories was a flash point for the war. The role of Jesse James in national politics seems grossly exaggerated and romanticized. He also is not even mentioned in Chernow’s biography of Grant – much less being at the center of chaos after the war and the inflammation raging through the occupied South that Grant was dealing with. He did seem to justify his murderous robberies as being a continuation of the war, although how much he really felt that was probably exaggerated by the newspaper man Edwards who glorified his exploits. Jesse was in reality hardly fighting a war against the North any more than Clyde Barrow was fighting an oppressive banking system during the Depression. Both rationalized their robberies and murders, but in fact they were killing and stealing from people who came from similar backgrounds to theirs, and who suffered the same grim economic struggles as they had. In the end, Jesse made no pretense that he was anything other than a train robber. The wars against the Lakota Sioux were in fact a major chapter in the settlement of the West – but to portray the Sioux as the only barrier was again a romantic oversimplification. No mention was even made of the treaties with Cochise and the Apaches, of the Modoc War, of the Nez Perce, the Comanches, the Cheyenne, etc. The genocide of the Sioux and other plains Indians by Sherman was an accurate portrayal of government policy near the end of Grant’s Presidency. The collapse of the Sioux and the ultimate surrender and murder of Crazy Horse is accurate, but to portray him as “one man doing all he can to stop Western migration” is an exaggeration. He was trying to stop it in his homeland and he became perhaps the greatest symbol of native Americans trying to protect their land and their culture – but the struggle was ongoing in other places. The return of Sitting Bull and his murder would come later, and was also consistent with facts I have read in several references. I think the documentary is correct in that the death of sitting Bull and the massacre of the Sioux at Wounded Knee did indeed represent the end of attempts by Native Americans to try to preserve some of their culture. Even Geronimo had surrendered in 1886 – the last resistance to living on a reservation by native Americans was gone.

I did watch the rest of the series, but mostly for entertainment value. I did not fact check anything after the Grant Presidency. I assume it was factual, but like the first 4 episodes, over simplified and romanticized. The facts and folklore are very difficult to separate when it comes to Wyatt Earp, Billy the Kid, etc. I was disappointed they made no mention of Endicott Peabody’s short time in Tombstone. Nor did they mention John Slaughter. In fact, a major disappointment of the documentary was that it simply repeated the well worn stories in our folklore, excuse me, history, and offered nothing of the struggles, sacrifices, lives, hopes, dreams, successes and failures of ordinary Americans who risked everything they had to trudge across this continent.

The speeches at the end were hardly more than propaganda, and disappointingly romanticized, even lionized murderers, genocide, and cruelty. There was a lot of cruelty in the West that was not even mentioned. The de facto slavery of Chinese to work on the railroads and in the mines, for example, was not even mentioned. The incredible racism, exploitation, corruption, and cruelty of wealthy landowners, timber barons, railroad owners, mine owners, was almost completely ignored. I would like to see a documentary where we learn about the people who really suffered the hardships of settling the West – the farmers, miners, ranch hands, railroad workers, etc - who were mostly immigrants. I would like to see those who lived honest, decent, and very hard lives be so respected in our history. They, and not a gaggle of gunslingers, outlaws and Indian fighters were the real story behind the settling of the West. That is what I expected from Robert Redford. This does not deliver it.

DAK77Reviewed in the United States on August 11, 2018
3.0 out of 5 stars
Entertaining but not accurate
Innacuracies are the biggest issue with the series. It’s entertaining but anyone who knows western history in the least can spot the issues. Billy The Kid’s story alone left out LG Murphy, Alex McSween and The Regulators (minus one mention). Actors (who acted in western movies) such as Kiefer Sutherland, Burt Reynolds, Danny Glover are used as authorities for some reason along with real western historians during the segments. Overall entertaining but seek elsewhere if you want to know what actually happened.
36 people found this helpful

carol andersonReviewed in the United States on September 27, 2018
3.0 out of 5 stars
GREAT OVERVIEW RUINED BY JUNK FOOD FORMAT !!!
I really like that this series shows the BIG PICTURE overall timelines in history. For example, after the Civil War, the railroads were being laid across country, and how that impacted the Lakota Indians and their treaties, vs Jessie James in the South robbing the railroads to spite the North. I've watched all these stories individually, but never realized they were all happening at the same time ! That is my favorite part of this series !
I love Robert Redford, but take off 2 stars, probably due to AMC Networks policies not by Redfords choice...

I DETEST PROGRAMS THAT USE "FILLER SUMMARIES" WHERE EACH COMMERCIAL WOULD BREAK ! DUH ! LIKE I CAN'T REMEMBER WHAT THEY SHOWED BEFORE THE
2 -3 MINUTE SPAN OF COMMERCIALS ? It just bores me to keep replaying what they just showed ! Tv shows have been around for almost 70 years, folks never had a problem retaining the subject matter pre commercial interruption before ! Did we suddenly lapse back into caveman brains ? It's absolute garbage and ruins the full enjoyment of show. It's the same as processed food companies filling real food with chemicals and especially corn syrup to see stretch it further. Therefore ruined it becomes JUNK FOOD !!!
PLEASE ! ROBERT REDFORD, TAKE A STAND AND NEVER MAKE ANOTHER PROGRAM WITH THAT FORMAT AGAIN !
26 people found this helpful

Erik C. OstreshReviewed in the United States on September 12, 2018
1.0 out of 5 stars
It was simply wrong.
So yeah....They got the history wrong. Sure a lot of major points were correct but they fabricated meetings between Billy the Kid and Jesse James. That was an outright fiction. And the way they portrayed Billy's break out from the jail was actually less dramatic than the eyewitness accounts of the event. If I rewatched them all I could probably remember more but overall just assume that a third to a half of the events told are B.S. Always really respected Robert Redford. Honestly surprised he lent his name to this project.
28 people found this helpful

GMANReviewed in the United States on February 6, 2020
1.0 out of 5 stars
Horribly inaccurate. History is History, should not be open to interpretation.
Along with the many, many, many inaccuracies pointed out by other reviewers, my biggest gripe about this series is about the Trans Continental Railroad. This "documentary" would have you believe that Thomas Durant and the Union Pacific Railroad are solely responsible for building the railroad when in FACT 3 railroad companies built the railroad. They even go as far as depicting Thomas Durant drive the "Golden Spike" at Promontory Utah when in fact it was Leland Stanford of the Central Pacific Railroad that actually drove the "Golden Spike". Unforgivable butchery of History.
14 people found this helpful

KMReviewed in the United States on May 18, 2019
3.0 out of 5 stars
Hollywood Entertainment
This series is entertaining, but Hollywoodized as usual. The title is misleading as if this series is a documentary, but not. Former western actors interjecting their opinion or reading a script as if they are expert historians. A lot of hidden PC in this as well. Heck Robert Redford produced it and he's a big PC guy. Tired of hearing about the noble Lakota (Sioux). They stole the Black Hills from the Shoshone and the Crow. The whites killed off the bison blah blah blah. The Indians and cattle brought by the Spanish are as much to blame for the loss of Bison as well. Kens Burns' The West is a true documentary. Watch that for facts. 3 stars for entertainment value.
14 people found this helpful

Darryl BarkerReviewed in the United States on August 23, 2018
2.0 out of 5 stars
Mediocrity ripe with fiction and inaccuracy.
At best, this program is entertainment sprinkled with occasional fact. At worst, it is misleading, inaccurate, and a typical Hollywood treatment of history replete with glaring political undertones. If you are a true history buff, you'll get a good laugh out of this show. I'm calling it a "show" because that's what it is--barely.
30 people found this helpful

WesManReviewed in the United States on October 25, 2019
1.0 out of 5 stars
Disappointing....
I can't recommend this. As many others have mentioned, widely inaccurate, too many actors reciting dialogue that was not coming from experts, highly too dramatic, and SLOW MOVING TOO. I'm a fan of Ken Burns, and he keeps things moving with just still photos. Was there some sort of lack of historical material that they need to string it out with melodramatic and inaccurate scenes? Ah well... the actors got paid.
11 people found this helpful
See all reviews
Back to top
Get to Know Us
Make Money with Us
Amazon Payment Products
Let Us Help You
EnglishChoose a language for shopping. United StatesChoose a country/region for shopping.
© 1996-2022, Amazon.com, Inc. or its affiliates