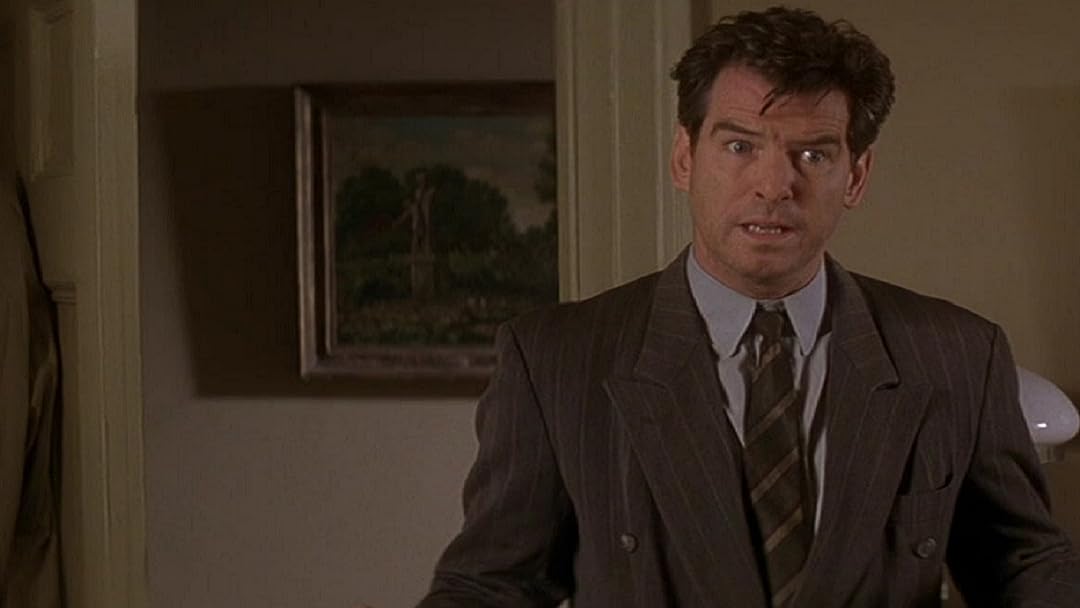 (665)7.01 h 35 min2002X-RayPG
Based on the true story of Desmond Doyle (Pierce Brosnan), who after losing his job and watching his wife leave the country with another man, has his children taken away by an arcane custody law. Doyle cleans up his act and wages an unlikely legal battle to regain custody.

Deborah MarieReviewed in the United States on October 7, 2018
5.0 out of 5 stars
Wonderful story of God's faithfulness
Verified purchase
This truly was an incredible true story of a selfish mother that leaves her husband and 3 children ,and an extremely loving father that would not give up the fight to get his children back from the orphanage. The cast was great, the acting superb , and the ending was awesome. I hope to God that sister Bridgit that loved to beat children was put on cleaning duty for the rest of her life. I follow the bible and not any man so some of the things like praying to people is against the Word of God, and offensive to me, and the LOrd. However the story is beautiful apart from the errors in it against the word of God.
19 people found this helpful

filmlady_3Reviewed in the United States on January 16, 2019
5.0 out of 5 stars
Great Story! Pierce Brosnan as a Dad
Verified purchase
With all the films to select from sometimes you have to go to the players. In this case it was the actor Pierce Brosnan, my guess (and I was right) that he's always done great films. Setting a Precedent for good is Progress moving life forward in fairness and justice for all no matter the race, country or culture. This film has a Great story. The Cast even the children were awesome. This film is a story within a story with lots of humor and seriousness a great balance. The film deals with hard issues of strict rules of religion and difficult people of the church, infidelity with a twist, and losing a loved one. The story goes right to the main character but is overshadowed by the story of her father. The viewer follows the story of the father but the back story is the story of a child's observations of her father's story which effects her reality, he is suppose to be her protector but in the end she is the one who saves. Evelyn, the unlikely hero of the film. A Great Must Watch Family film.
16 people found this helpful

seafanReviewed in the United States on April 29, 2020
5.0 out of 5 stars
You will be entertained!
Verified purchase
How have I never heard of this movie? It was wonderful. It is a beautifully told period piece that tells the story of a family divided by an arcane Irish law that empowers the government to oversee the rearing of children and requires the consent of both parents to determine the education and upbringing of their children should the family be broken in any manner. In this case, the mother has deserted the family and moved to Australia leaving Desmond Doyle (Brosnan) a single father. Doyle must not only fight to protect his children who are being mistreated in a Catholic orphanage, but also must win a reversal of the law at the Irish Supreme Court level to get his children back. The story is touching, and complete with humor, 1950's Irish culture, legal wit, and a touch of romance. You will be very satisfied after watching this movie.
7 people found this helpful

Me2Reviewed in the United States on December 26, 2020
5.0 out of 5 stars
Never give up!!!
Verified purchase
If this movie doesn't ring your bell, your clapper's broken!!!
A father's love for his children is highlighted.... a needed highlight in this day & time when there are so many absent fathers. Today's society doesn't seem to esteem dads, but they are crucial in their lives of children. Like it or not, that's God's design..... that children have both mother & father.
Desmond Doyle is a true hero along with those who fought against all odds with him and for him. Perseverence and persistence wrapped in love, commitment, prayer can stand up against Goliaths.
This story has joys and sorrows, kindness & cruelty, justice & injustice, heartbreak & betrayal vs. commitment and trust, genuine Christian faith in action and perverted faith too.... many contrasts.
BTW, it's a tear-jerker, but not in an artificial sappy way! The fact that it's based on a true ground-breaking legal battle and life situation is a bonus; real life is interesting too.

Kitty MooreReviewed in the United States on January 22, 2020
5.0 out of 5 stars
Simple, classic, well made movie, definitely worth watching
Verified purchase
A warm, emotional story of love, loss and hope based on a true story of a man’s fight for his children against archaic family laws of Ireland. Brosnan show his acting skills are more than just Bond, portrays Doyle convincingly as an ordinary, workingman who likes his beer but gets his act together to fight to regain custody of his children. Julianna Margulies and Aiden Quinn are excellent and little Sophie Vavasseur will steal your heart.
3 people found this helpful

Terra NovaReviewed in the United States on June 26, 2015
5.0 out of 5 stars
An uplifting tale of persevering against incredible odds - and prevailing
Verified purchase
After his wife abandons him and his family, a loving, but flawed father, loses his children to state and church control. This is a beautiful tale of a man who perseveres - improves and changes - and finds allies along the way - because he is willing to fight for what is right: Love and Family. Based on true events, it is worth watching.
20 people found this helpful

David A. GreeneReviewed in the United States on September 6, 2009
5.0 out of 5 stars
Sweet, simple little gem of a movie
Verified purchase
I read several comments expressing surprise that this film did not make any kind of splash in the theaters. This hardly surprises me. For so long now, the industry has been single-mindedly focused on promoting movies that, in one way or another, have a larger-than-life quality to them. They pitch non-stop action, suspense, immense grandeur, all star casts, sweeping, epic sagas, etc..... "Evelyn" is none of these. It does not have a dozen wild plot twists. There are no astounding special effects. The cast is not bloated with superstars. Instead, this is a fairly simple little story. It could be called sentimental, but it is not one of those sticky-sweet shows that transparently tries to work a tired tear-jerker formula on the audience. It tells a true story, simply and tenderly. The cast does a wonderful job without over-doing it. The scenes touching on the perspectives of the children unfold with a captivating sensitivity to the way most children actually perceive their world. We are shown their sometimes magical view of things without drifting into obviously cinematic fantasy sequences. Simple rays of sunlight on a little girl's fingers can momentarily prove as touching and enchanting as many a familiar excursion into computer generated wonderlands.
For those seeking adrenaline rushes, jaw-dropping visual extravaganzas, etc., etc....... you might as well look elsewhere. "Evelyn" is a very moving, stirring little film, but probably only for those who are willing to settle into its gentle, intimate little reality. Of course, part of the fun in experiencing this true story lies in the discovery of how the struggles of its characters ultimately brought about major legal and social change in Ireland where it all takes place. It might be noted that all those who enjoy films featuring a rich sense of Irish life and culture, should take great delight in this offering.
35 people found this helpful

Daniel ThomasReviewed in the United States on September 21, 2021
4.0 out of 5 stars
"If God is infinitely merciful, he wouldn't want you to do that."
Verified purchase
Quiet but good drama. Evelyn is well acted by its cast. Problems- Desmond Doyle may have been less than pleasant with his wife and this isn't shown in the movie. Also only half of Doyle's children are portrayed. I also think Alan Bates' character was under portrayed. Evelyn is flawed but not too much so. 3.75 out of 5 stars.
See all reviews
Back to top
Get to Know Us
Make Money with Us
Amazon Payment Products
Let Us Help You
EnglishChoose a language for shopping. United StatesChoose a country/region for shopping.
© 1996-2021, Amazon.com, Inc. or its affiliates