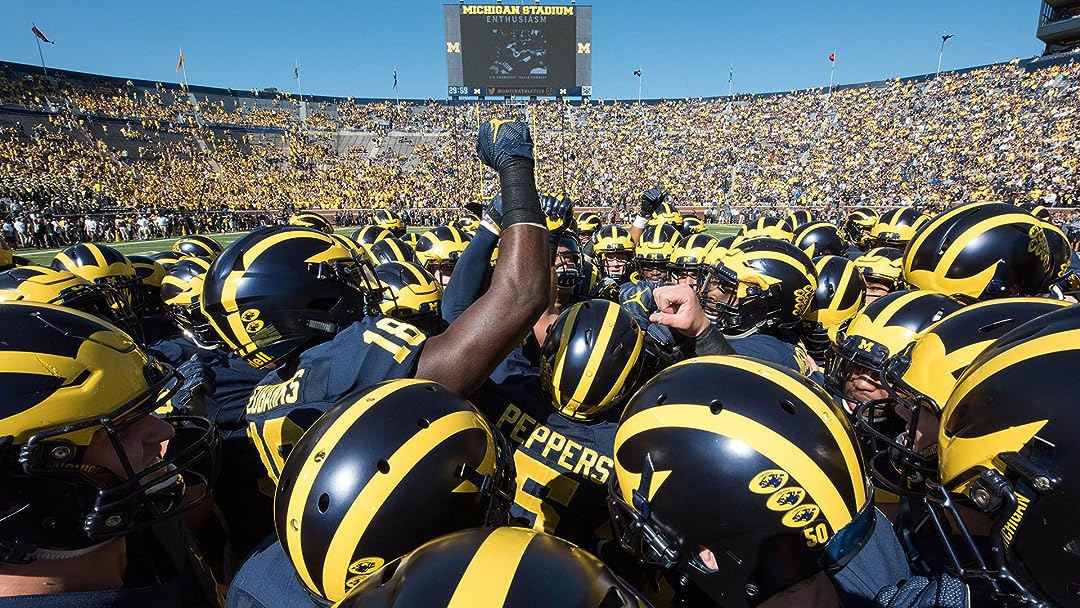 All or Nothing: The Michigan Wolverines

Season 1
(290)
7.62018X-RayHDRUHD16+
All or Nothing: The Michigan Wolverines goes behind-the-scenes of the winningest program in college football to chronicle Michigan’s 2017 season. Head coach Jim Harbaugh leads his alma mater’s young team as the series provides an intimate look at the lives, both on the field and off, of the student athletes charged with carrying on Michigan’s legacy.

Amazon CustomerReviewed in the United States on May 5, 2018
5.0 out of 5 stars
Five Stars
Verified purchase
Well done.
2 people found this helpful

SpartyReviewed in the United States on January 9, 2019
5.0 out of 5 stars
A Whole Lot of Nothing!!!
In December 2014 ... when James Joseph Harbaugh (AKA Jarbaugh) "assumed the position" ... he told us "this is Michigan, there are no "turnarounds" at Michigan, there is greatness, a long tradition of it!" That was kinda weird since the team had gone 46 - 42 over the last 7 years but whatever.

Whatever was right because the minions went giddy!!! The "Corn & Blue" Kool-aide flowed endlessly!!! The prodigal son has returned ... the quintessential "Michigan Man" ... who surely produces Golden Easter Eggs from his "nether regions" ... will lead us to the Promised Land! Confidently they made "Harbs" the highest paid coach in all of football and then went over to Wall-Mart to celebrate (cha-ching). These were indeed the greatest of times in that cozy little hamlet of Ann Arbor.

But two and a half years and $27 million later things were not as pleasing in the village. Jarbaugh was 20 & 6 during his tenure ... a mortal 77% winning record ... and most importantly 1 & 3 against his rivals ... the Mighty Spartans and Merciless Buckeyes. Rumors even circulated that corrosion was found on the Golden Easter Eggs but that was never confirmed.

But Jarbaugh had a plan! In the summer of 2017 ... before camp ... he would go the head of the Holy Roman Catholic Church ... the Pope himself ... and present "His Eminence" with an authentic Michigan Wolverine football helmet made by Riddell. Surely that would make things right in the land of the Wall-mart Wolvies! It was a bold and arrogant plan!

It's since been confirmed that the helmet was sold on Ebay for $39.99 ... Buy It Now ... just three days later! Jarbaugh never learned of this "Papal Smack Down" and broke camp in the fall of 2017 adopting the "All or Nothing" mantra.

Clearly the Pope has a sense of humor as Michigan won their first four games of the season and was ranked #7 when they hosted unranked Michigan State. Surely Jarabaugh's time had come to deliver on that $27 million cash cow. The minions held their Golden Easter Eggs to the heavens! But fate is a fickle mistress and she controls the storm clouds, and once again "Little Brother" had "Big Sister" right where they wanted and handed the "Arrogant Ones" a 10 to 14 loss! Wow, considering "Little Brother" has beat "Big Sister" 8 of the last 10 games you can imagine that the "Big House" had once again become the world's largest vomitorum!

Jarabaugh had once again been exposed and the rains kept coming as Michigan went on to lose to Penn State and Wisconsin and once again to those "Nasty Buckeyes" in that fall of 2017 ... leaving Jarabaugh with no conference titles in three years and a stunning record of 1 & 5 against his rivals! Obviously the golden Easter Eggs had become corroded copper pennies!

But wait there's more! The Big Ten would send 8 teams to bowl games that holiday season, and the 8 & 4 Wolverettes ... because of their "brand" ... were slotted into a New Year's Day appearance against an unranked South Carolina team. Talk about a layup ... yet once again the Pope had the last laugh as the feisty Gamecocks took the "Arrogant Ashes" behind the woodshed for some old school dis'plin!

The Big Ten went 7 & 1 in bowl games that year ... a feat that has never been done before. But that long tradition of "greatness" that Jarbaugh talked about in December of 2014 ... it was nowhere to be found! Pride does indeed come before the fall.

So ya, sign me up for 353 minutes of Jarabaugh in his 3rd glorious season (61.5% winning record). Sign me up for 10 episodes of the "Quintessential Michigan Man" showing the world he is the most over paid coach in all of college sports!!! Let's hope those scenes with the Pope and John O'Korn made the cut. GO GREEN ... GO BUCKS!

M. MartinReviewed in the United States on August 6, 2019
5.0 out of 5 stars
College game, with "NFL FILMS" quality production
The point is not whether you are a Michigan Fan or not. This is an excellent series to get an Inside look into a top 10 College program. It's probably even BETTER, because the season does not go as planned. Great camera work, some of the "reality" bits, yes they knew they were on camera..... but the overall production is excellent.
2 people found this helpful

Ritch C.Reviewed in the United States on April 6, 2018
5.0 out of 5 stars
Don’t believe the One-Star ratings.
This is a high quality production. It really goes behind the scenes, showing all of the aspects of a college team.
9 people found this helpful

Boston, MAReviewed in the United States on May 31, 2018
4.0 out of 5 stars
An interesting glimpse into the Michigan football program
All or Nothing provides an interesting glimpse about what happens on the field - and behind the scenes - with the historically successful college football program at Michigan. I've always been impressed with Harbaugh's success on the field, and it's fascinating to see how he and his staff interact with the players. I liked Last Chance U (another docuseries about college football), but find All or Nothing much more positive in how the coaches react to situations. It's also fun to see the enormous talent that Michigan has and their potential in the upcoming season. Hopefully, their will be a second season for this program.

unpulicReviewed in the United States on April 7, 2018
5.0 out of 5 stars
Absolutely loved this.
Absolutely loved this. I hope they keep doing this with other teams because as a Michigan fan I can't tell you how cool it is to get to know your team on a more intimate level. For those of you who are 1 starring this just because you hate Michigan, you're missing the point. You're shooting yourselves in the foot. If you get this series cancelled your team won't have a chance and you'll lose the same opportunity to get to know your team.

Look, last season was a heart breaker and of course this would've been cooler with a happier ending...but it still felt like a happy ending. Watching these guys work their ass off was inspiring. Rashan Gary's mom was inspiring. Karan Higdon with his daughter, Don Brown's philosophy, Larry Prout Jr's strength and devotion, Grant Newsome working on his recovery, all the guys that raised money for the Chad Tough Foundation. All that was so inspiring. It's sad to see off McCray, Hurst, Isaac, Hill and the rest go. I wish them all the best. But there's also hope and faith for brighter days ahead. As sports fans we have that in common.

I also think in this age of social media, click bait headlines, sports writers making provocative statements and just general troll like behavior it was nice to just watch something that was real.
43 people found this helpful

DDKS2Reviewed in the United States on July 16, 2018
5.0 out of 5 stars
A must watch series that you didn't expect to be as inspiring as it was
Love the narration, Love the content, love the human aspects of going from Day 1 through to the end..... It is a story that looks at how men are made. It has also shown me a great deal more about the activities behind the scenes. Even if you are not a Michigan Fan (Go Blue) it is insightful and worth watching. Inspirational in many aspects. Single mother stories with great sons. Sons/Players that take on causes and support of things that are so much bigger than themselves. Heartwarming to say the least.

PaulReviewed in the United States on October 11, 2018
1.0 out of 5 stars
Zero interest
I have zero interest in this but amazon insists on advertising it at double volume of other shows before every episode of shows i do watch.
3 people found this helpful
See all reviews
Back to top
Get to Know Us
Make Money with Us
Amazon Payment Products
Let Us Help You
EnglishChoose a language for shopping. United StatesChoose a country/region for shopping.
© 1996-2021, Amazon.com, Inc. or its affiliates