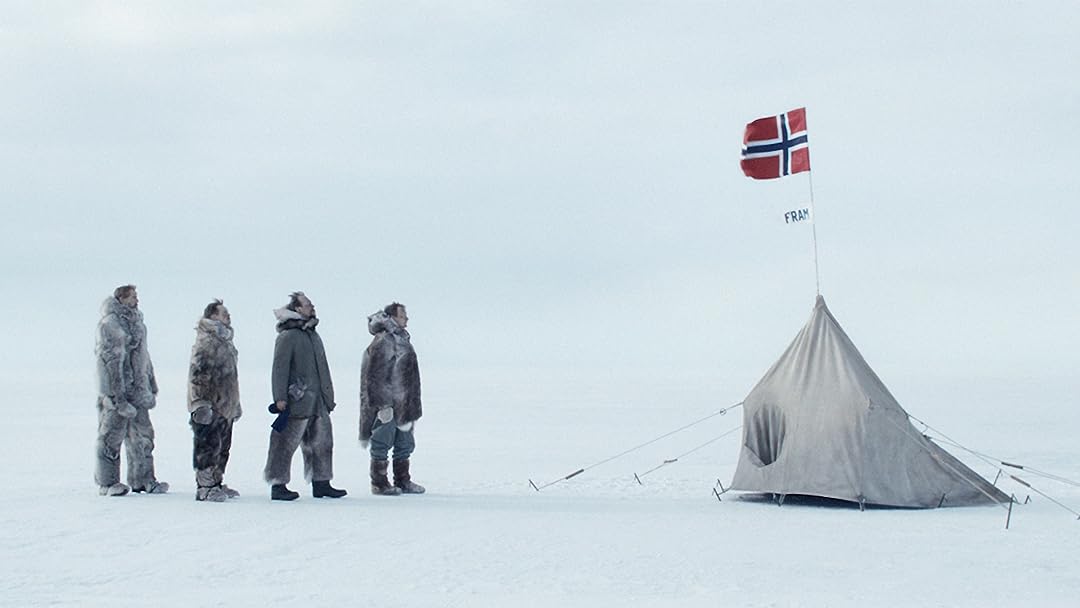 (119)
6.22 h 5 min202116+
Roald Amundsen's dream of reaching the North Pole haunts him throughout his life. He is obsessed with the idea of discovering the last unchartered lands of the world. While he wins the race against Robert Scott to becomes the first man ever to conquer the South Pole, Amundsen will sacrifice everything to be the first to explore the icy wastelands of the North Pole.

John P. Jones IIIReviewed in the United States on September 14, 2021
5.0 out of 5 stars
The last of the heroic age of explorers…
Verified purchase
Early in the movie there is an excellent scene that demonstrated how the hook was set in Roald Amundsen’s mind. His father brought home an illuminated globe. It was pre-electricity. The globe was illuminated by a flame inside a glass tube. Of necessity, the top of the globe is open, with the glass tube extending through it, to allow the heat and smoke to escape. Young Roald wanted to know what was really at the top of the globe. A bit later, he is shown in the bathtub, with lots of ice, trying to toughen his body to the rigors of the cold.

I knew the bits and pieces of the overall story of polar exploration, but this movie provided a comprehensive account, though Shackleton is never mentioned, which I felt to be OK because he did not directly interact with Amundsen as did Scott. When Amundsen heard that the English had claimed to have reached the North Pole (which was not true at the time), he changed his objective, and in secrecy decided to race to the South Pole, knowing that this was also Scott’s objective. Amundsen got the commitment of his crew that they were all in, on tropical Madeira Island, in September 1910. Precisely a year later they commenced their first attempt but had to turn back – having started out too early in the Antarctic spring. On October 20 they commenced their second attempt and made it in 55 days, arriving on December 14, 1911, leaving a note for Scott, who would also make it, but did not return to base camp, dying within a few kilometers of it. Squeamish alert: Amundsen relied on arctic dogs to reach the pole, and then ate them in appreciation of their efforts, all of which is graphically depicted in the movie.
Since the English had not reached the North Pole, Amundsen reset his goals on the only pole left. That involved taking a sailing vessel and drifting with the polar ice for five years to reach the pole. Bizarre indeed, in retrospect, and it did not work. He would eventually reach it, with Italian help, on May 12, 1926, by an airship.

Pig-headed, resolute, laser-focused (before lasers were invented), one-dimensional, all these terms can fit him, and more. I have to think of many an Olympic athlete who sacrifices the well-roundedness of life to be the very best in a very slender skill set and then only for a few years, before that very best is eclipsed by a very, very best. Amundsen never married and thus had no family. He preferred having affairs with married women; simpler, I guess. His finances and his troubled relationship with his brother are all interwoven throughout the film.

What no mere written account can provide are the stunning images of our globe’s polar regions: the glaciers, a sailing ship trapped in ice, crevasses opening up in the ice and open-cockpit planes flying and crashing on the ice flows.

Amundsen went in search of a fellow aviator and disappeared at the age of 58. Even very recent attempts to find him and the plane have been fruitless.

In its way the movie neatly complemented Amundsen’s laser focus and the tossing out of the extraneous. Between the time Amundsen reached the earth’s only two poles, Europe had a bit of a disturbance once called The Great War, now referred to as World War I. It is never mentioned. Only the Second World War is foreshadowed, for Amundsen reached the North Pole with the financial support of Mussolini, who obviously had other interests than making the trains run on time.

5-stars for an informative movie with some excellent cinematography.

Peter FranklinReviewed in the United States on September 29, 2021
2.0 out of 5 stars
A biopic of a rather unlikeable guy.
Verified purchase
I had always heard of Amundsen while reading about the ill fated Scott expedition and had always regarded him as a calculating and shrewd operator.

Instead, watch this movie and watch the guy kind of become an intensely unlikeable and unrelatable man. After the British metaphorically spit in his face after his South Pole return, you kind of think "oh I get it. Yep, he'll show them" but never really does more than follow his "every man for himself" ethos and chase married women when he's not dragging some kids home from an expedition like he was bringing home souvenirs.

Movie was well directed. It kind of slogs along. None of this is helped by Amundsen kind of muttering, stuttering and staring at stuff. Lots of time jumps. Unless you're following the guy's story on Wikipedia as you go, you may get lost in what's going on or realize how much has been condensed.

Some of it has deviated from history quite a bit. Not as badly as some other "historical films" but enough that you'll notice things if you familiarize yourself with the history.

Honestly I was bored out of my mind trying to find a reason to like the guy. I really just...can't. As a result the movie was a two hour time sink.

Peter ColeReviewed in the United States on October 27, 2021
4.0 out of 5 stars
Beware of British propaganda
Verified purchase
Roland Hundford's fabulous account of Amundsen's life and the race with Scott to the South Pole speaks volumes of the decline of the British Empire and the height of it's imperial disregard for anything not deemed English. That would be Inuits, dogs, skies, clothing and proper planning. Scott was a failure as a naval commander and more so as an explorer. His real obsession was with Shackleton who was beloved by the British people even if he too was not particularly good at planning an expedition. Shackleton was however dedicated to his men and the Endurance expedition says all we need to know about what he had that Scott didn't. Robert Falcon Scott never learned from Shackleton's mistakes on the journey that brought him within 90 miles of the pole before wisdom rather than ambition told him that to continue was to die. In the end that cost Scott his life. Taking 5 men on the push to the pole when depots and rations were laid out for four men was in the end just the final straw in a series of costly miscalculations. Scott never took seriously the importance of depot laying the fall before. Amundsen on the other hand saw it as critically important and pushed his depots out much further than Scott. He flagged them such that they were easier to find. In the end I think it was Scott's imperial reliance of 'man hauling' after the failure of motorized transport and the pitiful choice of Siberian ponies that were in bad shape to start with doomed his final effort. It might be of some value to remember that Amundsen's team started earlier, even after the aborted Sept start, and did not take rest days when the weather was foul. Everyone on the team was able to use a sextant to take measurements. Only one person on Scott's final team knew how to use a sextant. And perhaps the final irony is that everyone on Amundsen's team gained weight on the trip to the pole and back. If nothing else speaks to the brilliant effort put forth by the Norwegians, that simple fact separates success from heroic failure. It may also be worth remembering that Scott's diary was heavily edited for publication.

jgReviewed in the United States on April 12, 2021
3.0 out of 5 stars
trouble playing the video
Verified purchase
this would have been a much better experience if the sound effects weren't so much louder than the dialogue, which eventually i was able to reverse by disabling the dolby digital in the firestick home settings. then about halfway through the movie the subtitles started to lag and would not be in sync with the dialogue, even with starting and stopping the video. lastly and very strangely, the music, which greatly influences the experience- was off key. i just don't know what was going on here but clearly something was off in the playing of this video.

Small TreasuresReviewed in the United States on May 1, 2021
5.0 out of 5 stars
Amundsen was that good
Verified purchase
Making a movie about a lifetime of work will always be a challenge. Based on all I've read about Amundsen, this movie does a solid job covering his incredible life story. I personally wanted more on the South Pole expedition, but there was so much else to cover that the abbreviated treatment is understandable. Great movie about a remarkable explorer.
One person found this helpful

sycx1Reviewed in the United States on October 27, 2021
5.0 out of 5 stars
I love melodramatic movies like this
Verified purchase
Movies with easy-going action but without all the crazy violence are good.

JazzFanReviewed in the United States on August 26, 2021
4.0 out of 5 stars
Well Portrayed Amundsen
Verified purchase
Finely crafted and insightful portrayal of a rather complex personality.
One person found this helpful

Rafael MelendezReviewed in the United States on October 9, 2021
5.0 out of 5 stars
Heroic.
Verified purchase
Great acting and story. Make more of these. So much more rewarding than conventional Hollywood.
See all reviews
Back to top
Get to Know Us
Make Money with Us
Amazon Payment Products
Let Us Help You
EnglishChoose a language for shopping. United StatesChoose a country/region for shopping.
© 1996-2022, Amazon.com, Inc. or its affiliates