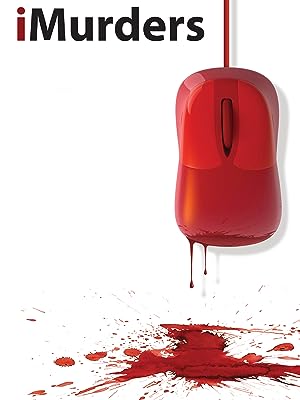 (17)
3.91 h 38 min200818+
A mysterious love triangle leads to a tragic shooting. Months later, eight members of a MySpace-esque chat room are being gruesomely murdered in the privacy of their own homes.

Studio
Scroll Down Films, Justice for All Productions,, Good To Be Seen Films

MelvinMReviewed in the United States on August 21, 2013
5.0 out of 5 stars
great movie
Verified purchase
This was a great movie. With a lot of twists. I just love a good movie with tony todd in it. LOVED IT.

SchuylarReviewed in the United States on June 7, 2011
5.0 out of 5 stars
Enertaining mystery/horror movie
Verified purchase
I have read bad reviews about this movie, but I enjoyed it. Well, I am not very picky when it comes to movies. The movie is an entertaining horror/mystery with a great twist at the end.

debbie garrettReviewed in the United States on August 21, 2015
1.0 out of 5 stars
horror movie
Verified purchase
You ran out of this movie .I could not purchase it.I was little upset.But I will try to get in when you get more in.

The Piper at the GatesReviewed in the United States on October 23, 2011
3.0 out of 5 stars
Just Your Average Suspense/Horror Film with surprisingly poor acting
I had been wanting to view this film for some time. The cast alone (Tony Todd, William Forsythe, Charles Durning) had me intrigued, and I felt that it was at least worth trying out. In a nutshell, the film is about a group of chatroom friends that are being brutally killed off one by one. Its done in the classic "Who done it?" style, that leaves the audience guessing until the end (though I did figure out the killer much sooner lol). And though the movie has some twists and turns, and a surprise ending of sorts, there's still not a ton of substance to the film. Surprisingly enough, the acting is rather poor. As expected, there was some poor acting from some of the supporting cast. But Tony Todd and William Forsythe also give lukewarm performances, while Charles Durning, who sparsely appears in the film, seems like he has nothing left. And considering the stage of his career, I guess that's somewhat understandable. I'm not even sure why he would even agree to do such a small role in such an insignificant film so late in his career actually. Again, overall this film doesn't offer a whole lot. As a horror film (though I'm not sure it even qualifies as horror), its not that suspenseful or graphic, and the body count is fairly low. But for a typical lower budget suspense film, its worth at least one viewing.

DarenReviewed in the United States on March 14, 2010
4.0 out of 5 stars
Chatroom Thriller Killer Gem
Great independent movie. Romeo(Frank Grillo) and Juliet(Terri Colombino) were perfectly cast. Definitely refreshing murder mystery. My one criticism is that their were too many recognizable faces,who really served no signifcant part, other than for the viewer to say, "Hey, that is Justin Deas." I would have preferred the alternative ending to the one chosen. Margaret Colin, wife of Deas was perfectly cast and proved a refreshing surprise in the end concerning her husband , played by William Forsythe, and his affair. The mysterious "killer among us" is not new, but the chatroom aspect was a refreshing local for the murders.

Many of the familiar faces in this movie like Tony Todd(Candyman) served no purpose for their getting the roles. Billy D. Williams was miscast, but obviously available. (What independent filmmaker is going to say no to a huge star like Billy D. Williams playing a role in a low budget film?)Unknowns would have been much better for both roles.

Grillo , perfect as the hero. Should have played a larger role in the resolution of this one. He and Colombino were a nice looking couple with good chemistry. Love the independent film arena.This is one of the gems. Will definately watch again.

Jim CherryReviewed in the United States on September 30, 2009
4.0 out of 5 stars
Won Best Picture at Chicago Horror Fest!
I saw iMurders at the Chicago Horror festival where some of the cast and crew was in attendance and director Robbie Bryan was awarded the best feature length picture of the festival.

iMurders is about seven friends who are members of a chat room on FaceSpace, a combination of Facebook and Myspace, one of their number is a Hollywood special effects artist with a flare for the theatrical and every month he invents a new game for them to play. When they start playing his latest game, members of the chatroom start turning up dead, and in gruesome ways. While none of the murders is especially explicit there is a fair amount of gore but most of the shock is supplied by quick edits and what you think you may see. I don't think it will disappoint enthusiasts of the genre.

The casting is also outstanding. William Forsthye stars and his voice and his presence on screen is a sinister menace. Another casting coup is Charles Durning with a small role as a psychiatrist. And Tony Todd of Candyman fame extends his horror credentials here, but not as the murderer (that would be too obvious!) plays FBI agent Washington, who is trying to solve the mystery before the entire chatroom is murdered.
5 people found this helpful

MattReviewed in the United States on October 16, 2009
4.0 out of 5 stars
iLiked it!
iMurders is a film about a small group of cyber-friends that meet-up once a week for an online chat. In their voice/video/text chats, the host (a special effects artist) chooses a game to play that lasts all month long. The winner of the final round gets a prize from the host's memorabilia collection.

But being iMurders, things obviously go a lot further than that premise. The month's game is supposed to be a Survivor style game, in which chat members are "knocked off" one by one for saying the pre-determined code word. However, the host of this game is very quickly incapacitated, and the self-ordained replacement host decides the new rules of staying alive in this game.

This film struck me with the number of character actors present... it runs the gamut from Tony Todd and Frank Grillo to the wonderful Gabrielle Anwar. However, even though those names get first billing, the spotlight here is placed on the less recognizable actors, such as Terri Colombino (the lead in iMurders).

Ironically, Colombino bears a striking resemblance to Diane Lane, star of the similarly-themed (if much worse film) Untraceable.

So, with all of these familiar actors finally getting their due, does the film do them justice? For the most part, it actually does! The plot is very interesting, and more interweaving than it seems to be in the first hour of the movie. There haven't been many good movies made about the dangers of "cyber-friends" that you've never met in person. And while the line-writing struggles to express any character's knowledge of the internet (multiple characters stiffly insert the word "computer" in front of other technology-based words, just in case you don't know what a chat room or keyboard is), ultimately the plot matters more than the believability.

By the end, you only have so many options for who the chat room killer may be, and the reveal came way out of left field. It doesn't explain everything in the end though, which leaves you hanging with some plot gaps (such as the FBI's immediate knowledge of the chat room... the FBI didn't even know how to stop 9/11 from happening, so you can't tell me they caught on to the chat room the second its visitors started becoming victims), but I can forgive some things ultimately because the rest of the movie makes up for it easily.
2 people found this helpful

The Movie GuyReviewed in the United States on July 9, 2010
3.0 out of 5 stars
ANOTHER WHO-DUN-IT
This is a murder mystery. You attempt to figure out the killer from the sketchy clues. The movie cuts the scene before it gives you the information one would need to solve the mystery. This technique is used in many such films, but in this one it was overdone and too obvious, as it appears to be a tool substituted for a lack of writing skills.

We know the beginning is a clue. A man is having an affair. The computer in the room is turned on and his wife comes home and catches them. The typical argument ensues followed by a gun shot. Who were these people? Who got killed? Who did the killing? We never find out until the end as knowing the relationship between the people in the story might make solving the mystery easier. The movie deliberately plants clues to lead one astray from the real killer.

Movie contains sexual situations, brief nudity, girl/girl action, violence, blood, and slight gore.
One person found this helpful
See all reviews
Back to top
Get to Know Us
Make Money with Us
Amazon Payment Products
Let Us Help You
EnglishChoose a language for shopping. United StatesChoose a country/region for shopping.
© 1996-2021, Amazon.com, Inc. or its affiliates