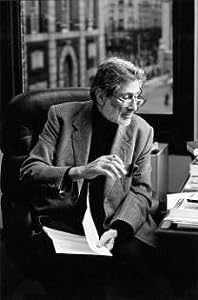 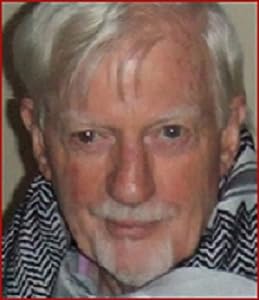 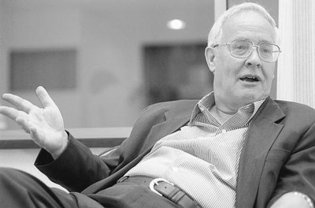 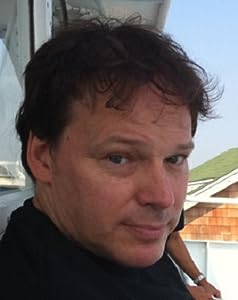 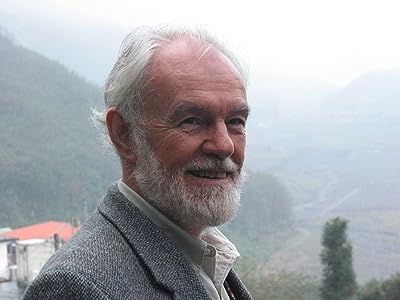 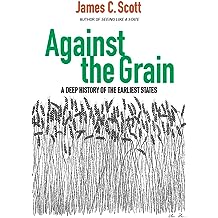 Against the Grain: A Deep History of the Earliest States Aug 22, 2017
by James C. Scott
( 206 )
$12.99
An account of all the new and surprising evidence now available for the beginnings of the earliest civilizations that contradict the standard narrative

Why did humans abandon hunting and gathering for sedentary communities dependent on livestock and cereal grains, and governed by precursors of today’s states? Most people believe that plant and animal domestication allowed humans, finally, to settle down and form agricultural villages, towns, and states, which made possible civilization, law, public order, and a presumably secure way of living. But archaeological and historical evidence challenges this narrative. The first agrarian states, says James C. Scott, were born of accumulations of domestications: first fire, then plants, livestock, subjects of the state, captives, and finally women in the patriarchal family—all of which can be viewed as a way of gaining control over reproduction.

Scott explores why we avoided sedentism and plow agriculture, the advantages of mobile subsistence, the unforeseeable disease epidemics arising from crowding plants, animals, and grain, and why all early states are based on millets and cereal grains and unfree labor. He also discusses the “barbarians” who long evaded state control, as a way of understanding continuing tension between states and nonsubject peoples.
Read more
Other Formats: Audible Audiobook , Hardcover , Paperback , MP3 CD 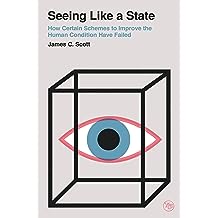 Seeing Like a State: How Certain Schemes to Improve the Human Condition Have Failed (Veritas Paperbacks) Mar 17, 2020
by James C. Scott
( 147 )
$9.99
“One of the most profound and illuminating studies of this century to have been published in recent decades.”—John Gray, New York Times Book Review

Hailed as “a magisterial critique of top-down social planning” by the New York Times, this essential work analyzes disasters from Russia to Tanzania to uncover why states so often fail—sometimes catastrophically—in grand efforts to engineer their society or their environment, and uncovers the conditions common to all such planning disasters.

“Beautifully written, this book calls into sharp relief the nature of the world we now inhabit.”—New Yorker 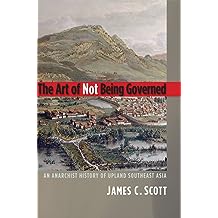 For two thousand years the disparate groups that now reside in Zomia (a mountainous region the size of Europe that consists of portions of seven Asian countries) have fled the projects of the organized state societies that surround them—slavery, conscription, taxes, corvée labor, epidemics, and warfare. This book, essentially an “anarchist history,” is the first-ever examination of the huge literature on state-making whose author evaluates why people would deliberately and reactively remain stateless. Among the strategies employed by the people of Zomia to remain stateless are physical dispersion in rugged terrain; agricultural practices that enhance mobility; pliable ethnic identities; devotion to prophetic, millenarian leaders; and maintenance of a largely oral culture that allows them to reinvent their histories and genealogies as they move between and around states.

In accessible language, James Scott, recognized worldwide as an eminent authority in Southeast Asian, peasant, and agrarian studies, tells the story of the peoples of Zomia and their unlikely odyssey in search of self-determination. He redefines our views on Asian politics, history, demographics, and even our fundamental ideas about what constitutes civilization, and challenges us with a radically different approach to history that presents events from the perspective of stateless peoples and redefines state-making as a form of “internal colonialism.” This new perspective requires a radical reevaluation of the civilizational narratives of the lowland states. Scott’s work on Zomia represents a new way to think of area studies that will be applicable to other runaway, fugitive, and marooned communities, be they Gypsies, Cossacks, tribes fleeing slave raiders, Marsh Arabs, or San-Bushmen. 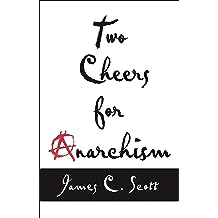 A spirited defense of the anarchist approach to life

James Scott taught us what's wrong with seeing like a state. Now, in his most accessible and personal book to date, the acclaimed social scientist makes the case for seeing like an anarchist. Inspired by the core anarchist faith in the possibilities of voluntary cooperation without hierarchy, Two Cheers for Anarchism is an engaging, high-spirited, and often very funny defense of an anarchist way of seeing—one that provides a unique and powerful perspective on everything from everyday social and political interactions to mass protests and revolutions. Through a wide-ranging series of memorable anecdotes and examples, the book describes an anarchist sensibility that celebrates the local knowledge, common sense, and creativity of ordinary people. The result is a kind of handbook on constructive anarchism that challenges us to radically reconsider the value of hierarchy in public and private life, from schools and workplaces to retirement homes and government itself.

Beginning with what Scott calls "the law of anarchist calisthenics," an argument for law-breaking inspired by an East German pedestrian crossing, each chapter opens with a story that captures an essential anarchist truth. In the course of telling these stories, Scott touches on a wide variety of subjects: public disorder and riots, desertion, poaching, vernacular knowledge, assembly-line production, globalization, the petty bourgeoisie, school testing, playgrounds, and the practice of historical explanation.

Far from a dogmatic manifesto, Two Cheers for Anarchism celebrates the anarchist confidence in the inventiveness and judgment of people who are free to exercise their creative and moral capacities. 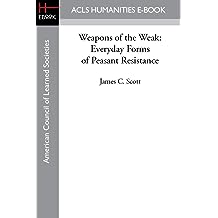 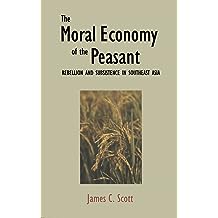 The Moral Economy of the Peasant: Rebellion and Subsistence in Southeast Asia: Rebellion and Subsistence in South East Asia Sep 10, 1977
by James C. Scott
( 9 )
$12.60
James C. Scott places the critical problem of the peasant householdsubsistenceat the center of this study.  The fear of food shortages, he argues persuasively, explains many otherwise puzzling technical, social, and moral arrangements in peasant society, such as resistance to innovation, the desire to own land even at some cost in terms of income, relationships with other people, and relationships with institutions, including the state.
Once the centrality of the subsistence problem is recognized, its effects on notions of economic and political justice can also be seen.  Scott draws from the history of agrarian society in lower Burma and Vietnam to show how the transformations of the colonial era systematically violated the peasants’ moral economy” and created a situation of potential rebellion and revolution.
Demonstrating keen insights into the behavior of people in other cultures and a rare ability to generalize soundly from case studies, Scott offers a different perspective on peasant behavior that will be of interest particularly to political scientists, anthropologists, sociologists, and Southeast Asianists.
The book is extraordinarily original and valuable and will have a very broad appeal.  I think the central thesis is correct and compelling.”Clifford Geertz
In this major work,  Scott views peasants as political and moral actors defending their values as well as their individual security, making his book vital to an understanding of peasant politics.”Library Journal
James C. Scott is professor of political science at Yale University.
Read more
Other Formats: Hardcover , Paperback 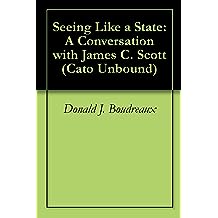 Seeing Like a State: A Conversation with James C. Scott (Cato Unbound Book 92010) Sep 8, 2010
by Donald J. Boudreaux , James C. Scott , Timothy B. Lee , J. Bradford DeLong , Jason Kuznicki
( 6 )
$0.99
James C. Scott's 1999 book Seeing Like a State has had an enduring influence across the ideological spectrum, and particularly in an unexpected corner — among market liberals. Although Scott has described himself, somewhat cryptically, as a "crude Marxist, with the emphasis on 'crude,'" it is clear that his work does not fit merely the Marxist paradigm. Though empirically based in peasant studies in Southeast Asia, Scott's insights have applications throughout the modern industrial world, and for economies both planned and spontaneous. (Our banner art, depicting a rice paddy viewed from the air, pays tribute to this aspect of Scott's career.)

Indeed, affinities can be seen between Professor Scott's work and theorists as diverse as Jane Jacobs and Michel Foucault, to say nothing of Friedrich Hayek and the rest of the Austrian School of Economics. Scott's thesis is startlingly simple: States can only exert their power on what they can know about. Knowing requires measuring, systematizing, and simplifying.

It requires, in other words, missing out on a lot of particular local data. Strategies of resistance to state power often take these gaps as their starting point, and problems with state rule often begin here as well. The state itself to a high degree may be said to run on legibility — the ability to know what's really going on in a governed population or territory. Legibility, however, is in limited supply, and it comes at a cost.

Joining in our conversation this month are Donald J. Boudreaux, an economist at George Mason University; J. Bradford Delong, an economist at the University of California, Berkeley; and Timothy B. Lee, a scholar at Center for Information Technology Policy at Princeton University and a Cato Adjunct Scholar.
Read more 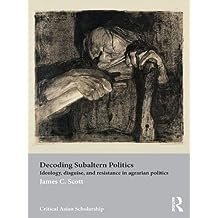 James C. Scott has researched and written on subaltern groups, and, in particular, peasants, rebellion, resistance, and agriculture, for over 35 years. Yet much of Scott’s most interesting work on the peasantry and the state, both conceptually and empirically, has never been published in book form. For the first time Decoding Subaltern Politics: Ideology, Disguise, and Resistance in Agrarian Politics, brings together some of his most important work in one volume.

The book covers three distinct yet interlinked bodies of work. The first lays out a framework for understanding peasant politics and rebellion, much of which is applicable to rural areas of the contemporary global south. Scott then goes on to develop his arguments regarding everyday forms of peasant resistance using the comparative example of the religious tithe in France and Malaysia, and tracing the forms of resistance that cover their own tracks and avoid direct clashes with authorities. For much of the world’s population, and for most of its history, this sort of politics was far more common than the violent clashes that dominate the history books, and in this book one can examine the anatomy of such resistance in rich comparative detail. Finally, Scott explores how the state’s increasing grip on its population: its identity, land-holding, income, and movements, is a precondition for political hegemony. Crucially, in examining the invention of state-mandated legal identities, especially, the permanent patronym and the vagaries of its imposition on vernacular life, Scott lays bare the micro-processes of state-formation and resistance.

Written by one of the leading social theorists of our age, Decoding Subaltern Politics: Ideology, Disguise, and Resistance in Agrarian Politics is an indispensible guide to the study of subaltern culture and politics and is essential reading for political scientists, anthropologists, sociologists and historians alike. 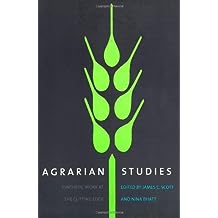 Agrarian Studies: Synthetic Work at the Cutting Edge (Yale Agrarian Studies Series) Sep 1, 2001
by James C. Scott , Nina Bhatt
$9.99
This book presents an account of an intellectual breakthrough in the study of rural society and agriculture. Its ten chapters, selected for their originality and synthesis from the colloquia of the Program in Agrarian Studies at Yale University, encompass various disciplines, diverse historical periods, and several regions of the world. The contributors’ fresh analyses will broaden the perspectives of readers with interests as wide-ranging as rural sociology, environmentalism, political science, history, anthropology, economics, and art history. 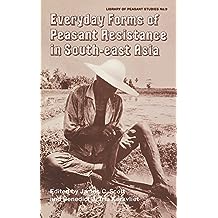