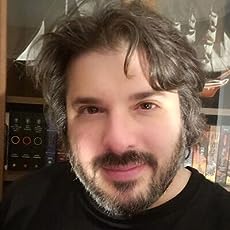 Daniel Arenson is a bookworm, proud geek, and USA Today bestselling author of fantasy and science fiction. His novels have sold over a million copies. The Huffington Post has called his writing "full of soul." He's written over seventy novels. His series include:

EARTHRISE -- They came from deep space. They came to destroy us. But we will fight back! Start reading with Earth Alone, the first novel.

STARSHIP FREEDOM -- The starship Freedom is just a museum ship... until the aliens attack.

REQUIEM -- Welcome to Requiem, an ancient kingdom whose people can grow wings and scales, breathe fire, and take flight as dragons. Start reading with Requiem's Song.

KINGDOMS OF SAND -- Enter a world of sand and splendor, a world where gladiators battle in the arena, where legionaries and barbarians fight for glory, and where empires rise and fall. Start reading with Kings of Ruin.

MOTH -- Discover Moth, a world torn between day and night--its one half drenched in eternal daylight, the other cloaked in endless darkness.

Learn all about the books: DanielArenson.com
Read more 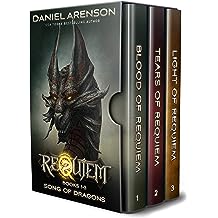 Song of Dragons: The Complete Trilogy (World of Requiem) Jan 4, 2014
by Daniel Arenson
( 588 )
$7.99
Song of Dragons, an epic fantasy trilogy, tells a story of blood, steel, and dragonfire. This bundle contains all three novels:

BOOK 1: BLOOD OF REQUIEM – Requiem, a kingdom of men who could become dragons, lies in ruin. Its destroyer, the tyrant Dies Irae, leads his griffins on a hunt for survivors. Will Requiem's last children perish in the wilderness... or once more become dragons and fly to war?

BOOK 2: TEARS OF REQUIEM – Dies Irae masters new servants: the nightshades, demons of shadow who fear no sword or arrow. They suck the souls from all who live, like a glutton sucking marrow from bones. Can Requiem's last children, a mere scattering of survivors, defeat them?

BOOK 3: LIGHT OF REQUIEM – The world lies in ruin. Forests smolder. The crows feast. From the ashes, Dies Irae raises new soldiers: monsters sewn together from dead body parts. As the undead army marches, Requiem's survivors muster what forces they can... and prepare for their final confrontation.
__________________

Requiem: Dragonlore
Book 1: A Dawn of Dragonfire
Book 2: A Day of Dragon Blood
Book 3: A Night of Dragon Wings

Requiem: The Dragon War
Book 1: A Legacy of Light
Book 2: A Birthright of Blood
Book 3: A Memory of Fire 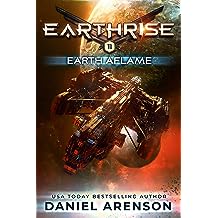 Our robots, once loyal servants, now slaughter us. Our cars, planes, and starships have become machines of death. Cyborgs roam the land, deforming humans, growing their twisted army.

Is a heartless, mechanized hell our future?

A faint hope shines. Heroes still fight. Famous names. Einav. Marco. Addy. Lailani. The heroes of the Alien Wars. Names etched in our history, in our hearts. Four friends. Four humans . . . against an army of metal.

A shadow has fallen. Humanity must shine brighter than ever before.
Read more
Other Formats: Audible Audiobook , Paperback , Audio CD 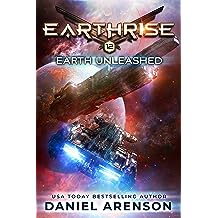 Earth burns. The Dreamer, a cruel artificial intelligence, brutalizes our world. His robots reduce our cities to ash. His cyborgs march by the millions. Humanity is now an endangered species.

But we still fight!

A band of heroes undertakes a dangerous quest. Some call it a suicide mission. They fly to a computerized world, deep in space, where the Dreamer dwells.

There humanity will face an electric god. There we will fall . . . or rise higher than ever before.
Read more
Other Formats: Audible Audiobook , Paperback , Audio CD 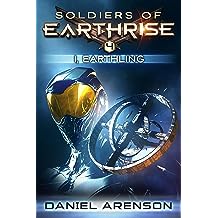 Armies muster for the final battle.

On one side fights Earth. Mighty. Wealthy. The center of an empire. On the other side: Bahay. A humble planet. A backwater. A world whose people will never surrender.

Jon and Maria fight on opposite sides. But to end the violence, they must work together. The very fate of humanity depends on it.

Yet the fires burn so hot. The hatred runs so deep. As the climactic battle flares, as the bombs fall and the cannons boom, can Jon and Maria survive? Or will this war rip them apart?
Read more
Other Formats: Paperback 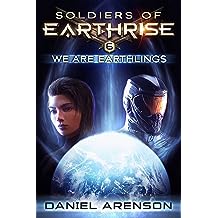 The fate of humanity will be sealed.

We’ve been fighting this war for so long. On one side—an empire spanning the stars. On the other side—a single rogue planet.

We’ve shed so much blood. We’ve buried so many sons.

Or everything we’ve fought for will burn.

We Are Earthlings – the sixth and final novel in the Soldiers of Earthrise saga. 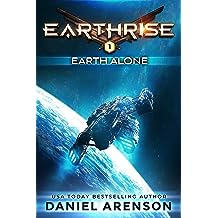 Fifty years ago, bloodthirsty aliens devastated the Earth. Most of humanity perished. We fell into darkness.

But now we rise from the ashes. Now we fight back.

Marco Emery was born into the war. After his mother is killed, he joins the Human Defense Force, Earth's ragtag army. Emery must survive basic training, become a soldier, and finally face the aliens in battle.

Against the alien onslaught, Earth stands alone. But we will fight. We will rise. We will win. 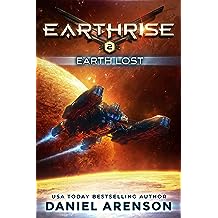 We call them the scum. They came from deep space. Creatures of claws and endless malice, they ravage the world.

As the war flares, as cities crumble, Private Marco Emery and his platoon blast into space. They won one battle on Earth. Their next battle must be fought in the darkness.

The scum will not rest until the last human is dead. Marco and his friends must defeat them. They must win. Or Earth will fall.
Read more
Other Formats: Audible Audiobook , Paperback , MP3 CD 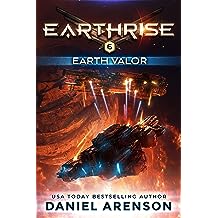 They destroyed our fleets. They burned our cities. They butchered millions.

But now we fight back.

Across the ruins of Earth, we rise in rebellion. In the depths of space, we seek allies.
And our last warship prepares for one final battle.

We will save it. Or we will die on our feet.
Read more
Other Formats: Audible Audiobook , Paperback , MP3 CD 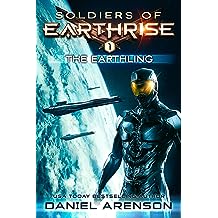 The Earthling (Soldiers of Earthrise Book 1) Oct 15, 2019
by Daniel Arenson
( 618 )
$2.99
From million-copy bestseller Daniel Arenson comes THE EARTHLING, a sweeping tale of courage, honor, and terror among the stars.

Jon Taylor is an Earthling. He doesn't care much about space. At least until his brother dies on Bahay, a war-torn planet many light-years away.

After the funeral, Jon joins the army. He learns to kill. And he flies to Bahay, sworn to avenge his brother.

Centuries ago, Filipino colonists arrived on Bahay to build a utopia. But this world has become a nightmare. Jon finds himself in a dizzying dreamscape, a world of dark jungles and neon slums, of ruthless guerrillas and intoxicating bargirls, of blood-soaked battlefields and glittering brothels. Here on Bahay, a man can lose his life in the jungle, lose his sanity in the gleaming drug dens, or lose his heart to a local girl with a sweet smile and knife behind her back.

On Bahay, nothing is as it seems. In this place of strange dreams and secrets, Jon hunts the man who killed his brother. But he learns that revenge always comes with a price... 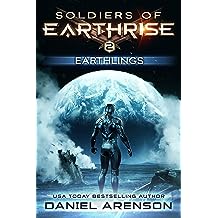 But the natives are fighting back hard. The bodies pile up. The bombs keep falling. There is no end in sight.

Jon is an Earthling, a soldier eager to serve his world. But now he’s bogged down in the jungles of an alien planet. And the enemy is ruthless.

Maria is a Bahayan, a native of this world of deep forests and deeper secrets. Her ancestors came from Earth, Filipino colonists seeking a better life. But Maria was born on Bahay, and she would die to defend her homeworld.

Jon knows she is the enemy. That her betrothed, a cruel warlord, murdered his brother. Yet Jon cannot help it. He is drawn to Maria like a moth to the flame.

As the war rages, secrets emerge. Lies unravel. Jon and Maria discover shocking truths . . . truths that could shake the very foundations of their worlds. 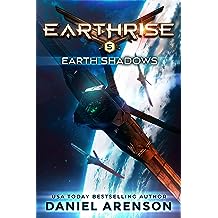 Our starships shattered. Our armies collapsed. Our cities crumbled.

As Earth smolders, the marauders imprison us in camps. They farm us like cattle. They torture us for sport. Earth weeps.

But there is hope.

The Ghost Fleet, an ancient alien armada, might still exist in deep space. In a single starship, Sergeant Marco Emery and his friends seek this mythical fleet. They must find it. They must return with its might.

Or the marauders will kill us all.
Read more
Other Formats: Audible Audiobook , Paperback , Audio CD 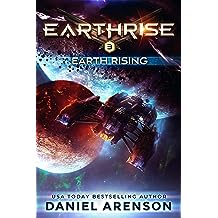 Our cities fall. Millions die. The scum, these cruel aliens from deep space, are determined to kill us all.

So we must kill them.

Humanity musters its greatest fleet. Thousands of starships rally. Millions of soldiers deploy. For Earth to stand a chance, we must invade the aliens' homeworld. We must destroy their planet.

Before they destroy ours.

Earth's fleet flies through space. We fly toward millions of enemy ships. We fly to almost certain death. This will be the hour humanity falls . . . or the hour of our greatest victory.
Read more
Other Formats: Audible Audiobook , Paperback , MP3 CD