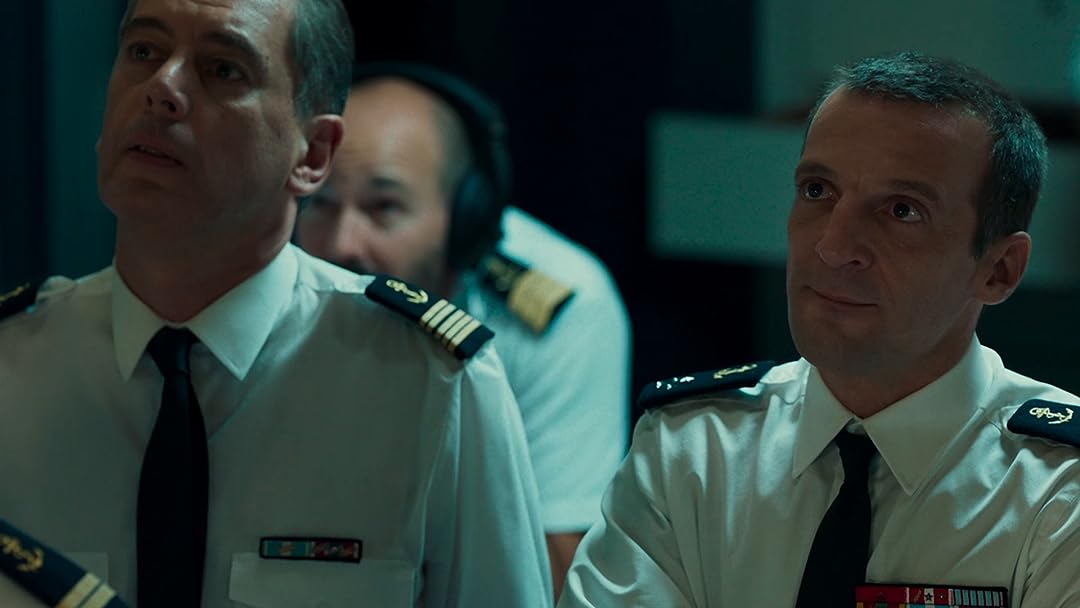 (181)
6.91 h 55 min2019X-Ray16+
A young man possesses the rare talent of being able to identify every sound he hears. Aboard a French nuclear submarine, everything depends on him. His reputation for infallibility takes a knock after a mistake puts the lives of the whole crew in danger. His determination to win back his comrades' trust drags them into an even more dramatic situation.

StereoMicReviewed in the United States on December 15, 2020
1.0 out of 5 stars
looks good but dubbed in English.
Verified purchase
I cannot tolerate movies where the spoken foreign language is dubbed over with fake English speaking voices. It disrespects the original actors. There should always be the option to hear the actors' voices along with English subtitles. Not offered here. Too bad.
27 people found this helpful

Tom D. Reviewed in the United States on February 20, 2021
1.0 out of 5 stars
None of it makes any sense.
Verified purchase
Ok, so he's supposed to be listening to everything in the ocean (including super quiet sounds even machines can't hear), and there are like 5 guys screaming at him the whole time. "I NEED A DIRECTION. TELL ME WHERE HE IS!" or some guy putting him down the whole time. How the hell is he supposed to hear anything while constantly having to respond to people screaming at him. And nobody listens to anybody. These sub crews suck. There's no cohesion. At all. No professionalism. Everybody's always questioning orders. Nobody ever just shuts the hell up. And then there's the point where he's like "I just can't handle it!" and instead of saving the world goes and hides under a torpedo so that he can cry for a while about it. This movie sucks. Everything about this movie was frustrating and stupid.
5 people found this helpful

LesReviewed in the United States on February 19, 2021
1.0 out of 5 stars
C'mon, man
Verified purchase
Tell me what fool Navy is going to surface a 2 to 5 billion dollar submarine with 130 member crew while under aerial and surface ship attack. And then have its dopey captain shinny up a ladder to shoot down an antisubmarine chopper with a one-shot Stinger type rocket. To make the circumstances even more absurd, Captain Rambo orders a sailor to shoot off the trigger lock while the dope is still holding the loaded rocket launcher. C'mon, man!
5 people found this helpful

Brian David EovitchReviewed in the United States on March 22, 2021
2.0 out of 5 stars
Never heard a wolf "call" like that! A poltergeist maybe, but not a wolf. Lol!
Verified purchase
This review is for "The wolf's call" movie. I really wasn't sure about this movie at first but figured I'd keep watching and see what happens since I like submarine movies. The "voice overs" were a tad annoying since the movement of their lips didn't match up with what was being said. But it was tolerable. Forget about the closed captions being accurate either. I guess I was really desperate to see a good sub movie. This kind of reminded me of "The Hunt for Red October" only the C movie version where the "C" stands for crappy. Mainly because the end of the movie had me saying, "Are you kidding me? What a crappy ending!" All in all though the movie did have a lot of good action in it with some suspense thrown in. Some of it was really out there and downright silly but you could tell they really did try. The acting wasn't horrible and definitely not the worst that I've ever seen. If you like submarine movies, don't mind crappy endings and have nothing better to watch then I'd say give it a try. But I wouldn't recommend ever paying for it! It was on prime so all I wasted was some of my time. Hope this helps and have a great and blessed day! :)
One person found this helpful

NHcoupleReviewed in the United States on February 3, 2021
2.0 out of 5 stars
Perfect movie with bad, jarring acting and direction. 5 stars demoted to 2
Verified purchase
Superb movie for many sections, then jarring dialog from Berteloot (Admiral). Movies are supposed to seduce you away to a different reality which this does for big sections, and then, whammo, stiff, out-of-place dialog or impossible scenarios. If you're a stickler for continuity and reality you'll be disappointed, if not a 5 or 5 star movie. For many parts technically excellent, for some parts, technically pathetic. I was disappointed.

C'mon, the world is ending and sailors are chastised for not wearing proper bits on their uniform? And really, the entire crew of the sub instantly die, and guess what? The two main characters are just fine.

W. BenderReviewed in the United States on February 28, 2021
2.0 out of 5 stars
Had potential, but never got there
Verified purchase
The base storyline and plot, wasn't all that bad and it should have been a decent movie. However, it failed in so many ways. All together, it just wasn't believable. Way too over dramatized, down to the music soundtrack. A "countdown to a countdown", that amounts to, an attempt to make dramatic, a procedural step in the missile launch procedure, that made little sense to dramatize nor had any aspect of it needing a "countdown". Way too much of that kind of thing, all throughout the movie. I suppose if I had known it was written and directed by a French diplomat, it probably would have made a bit more sense for it to play out as it did. It just had too much of a French art film feel to it.

This was one of those films where you hang in there hoping it gets better, but instead it just gets more unbelievable as it progresses. It wasn't too bad in a technical sense and the movie was shot well and acting was better than OK. I sum it up to directing being about conveying a message instead of just telling the story. I guess if you're French and want to feel good about your military being powerful and the people being intelligent and good at their jobs, while still being very human and thoughtful, then it's OK. But it was the characters' behaviors and the way the story was conveyed, that was too fanciful. I so wanted to enjoy this, but it just didn't happen.
One person found this helpful

BillReviewed in the United States on March 15, 2021
1.0 out of 5 stars
WATCHING GRASS GROW
Verified purchase
It was difficult for me to immediately detect what I liked or disliked about the movie. The more I thought about it, the more I disliked the movie.

As I reflect back on the movie, only one strong point came across to me. I was emotionally detached from the movie. I sat through the movie not caring about the characters or the plot. Why? Was it the English dubbing that was just terrible? No. Dubbing never conveys the emotion of the actor's lines. Nice try, but I would rather hear the actor's voices and read subtitles. Was it some scenes that tested believability? Yes. In a number of scenes, the crew seem so undisciplined for submariners. It did not add to the tension the director might have wanted to achieve. The final scenes, last 10 - 15 minutes or so really tested the credibility of the movie. I won't go into the details as it would spoil the ending for those who want to watch it.

If you really want to watch a good submarine movie, go watch U-571, Hunt for Red October or a classics like Run Silent, Run Deep or The Enemy Below, if they're available on Amazon prime.

Okemos56Reviewed in the United States on March 13, 2021
3.0 out of 5 stars
Arggh!
Verified purchase
The movie chooses visually dramatic action over realism every time, and the result is a very disjointed and implausible film. The opening scene has many guffaws (a modern sub would shoot down a helicopter with a missile, not an RPG, which almost certainly wouldn't work anyway, people don't chastise and scream at each other in the middle of underwater sub battle, and a sub captain would not surface in sight of an enemy surface vessel to identify a few). The gross implausibilities continue throughout, but nevertheless, the movie connected emotionally with me by the end. Won't watch it again, though.
See all reviews
Back to top
Get to Know Us
Make Money with Us
Amazon Payment Products
Let Us Help You
EnglishChoose a language for shopping. United StatesChoose a country/region for shopping.
© 1996-2021, Amazon.com, Inc. or its affiliates